The Lagos State Police Command manning the protest venue of the Yoruba nation agitators and dispersing them with gunshots, water cannons and teargas may have started having its spiritual implications on the officers. 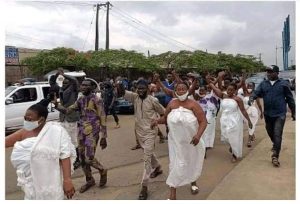 This observation was contained a trending voice note on social media, as narrated by one of the ‘officers’ deployed to carry out the operations, who was heard lamenting that many of them are now victims of spiritual attack.

The voice was heard lamenting that, many of them who in the course of chasing away the protesters by beating them, now have their hands swollen up, and looking for spiritual solution, pointing out that from the experience they are having with the swollen hands, it was clear that, it was beyond ordinary.

The voice recounting his bitter experience to a suspected family member on the telephone discussions added that, one of their boss, a top-ranking police officer had equally lost his voice.

‘At a point we took to our heels. Four of our vehicles suddenly developed faults, and we had to flee from the vicinity. All those women traditionalists in white regalia, who we harassed and beaten, all those who beat them now have their hands swell up, and they are all looking for spiritual solutions now. Even one of our bosses is also a victim and has lost his voice. We bite more than what we can chew’, the voice emphasized

The ‘policeman’ also attributed the loss of voice by the police chieftain, as a spiritual attack, though as at the time of filing this report, it could not be ascertained, but the victim, allegedly link the spiritual attack to the women traditionalists who participated in the protest but chased out alongside other participants

The Nigerian Police, it is recalled on Saturday used teargas, water cannons and fire gunshot to disperse hundreds of Yoruba nation agitators who converged at the Gani Fawehinmi Freedom Park, Ojota Lagos State waving ‘Oduduwa nation’ flags and banners as well as clamouring for a ‘sovereign’ state.

In the course of a gunshot, a stray bullet allegedly hit a 24-year-old hawker identified simply as Jumoke, in the back and her lifeless body was reportedly taken away by the police.

The deceased girl and others were running when police started firing into the air, while a witness added that said the bullet hit her inside the compound and her corpse was brought out thereafter, but the police has since denied and absolved itself from the alleged killing.

“The Command did not fire a single live bullet at Ojota rally today. The said corpse was found wrapped and abandoned at a distance, far from Ojota venue of the rally, behind MRS Filling Station, inward Maryland, on the other side of the venue, with dried blood stains suggesting that the corpse is not fresh. After a close look at the corpse, a wound suspected to have been sustained from a sharp object was seen on it”, Adejobi police spokesman said

Traditionalists were not left out in the rally, as they joined hundreds of protesters to compliment the agitation for the Yoruba nation, and seen dressed in the traditional regalia.

Meanwhile, as at the time of filing this report, efforts to reach the Lagos State Police Command Public Relations Officer, Muyiwa Adejobi for his comments and reactions over the spiritual implications as narrated on the trending voice note proved abortive.

President Muhammodu Buhari appoints board and management of...

Olori Naomi hasn’t returned to the palace of...