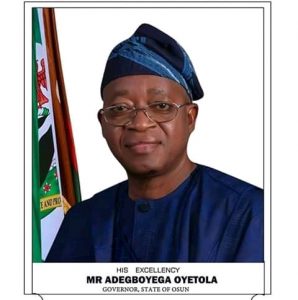 APC in Osun has told the state Governor, Adegboyega Oyetola, that he is on “the threshold of a distinguished career in governance.”

According to the party, “not only will his performance astound his friends and supporters, it will also confute his political foes.”

In a celebratory message to mark the governor’s 65th birthday on Sunday, signed by the party’s director of publicity, research and strategy, Kunle Oyatomi and circulated to the media in Osogbo today, the APC declared that;

“Governor Oyetola has a unique opportunity to transform the next decade of his life to one of exceptional service to the state and people of Osun.”

Parts of the message reads ……

“Our Chairman, Prince Gboyega Famodun and the entire Executive of the party, including members of the APC family in the state, wish our calculated Governor many happy returns of the day.

“We have no doubts in our minds that this event which comes close to the first anniversary of your governorship, brings with it the good omen that our people desire

“Regardless that protracted legal challenges considerably hindered your ability to devote full attention to governance, you still had time and the will power to address those urgent issues that impacted the lives of our people.

“Your efforts on healthcare infrastructure since you assume responsibility as governor have been remarkable.

“You have also since then resurrected that cost efficient culture, (which predated our Independence), of fixing broken and failed sections of our roads before they become death traps.

“You have also refurbished and opened up roads leading to towns, villages and communities that had for some time now been very difficult to access.

“You have shown extraordinary compassion to civil servants, who might have been in some discomfort, but for mutual understanding of the state’s financial position.

“Above all, you have been spotted and recognized by the world for your commitment to opening access to our rural communities in which regard the French Ambassador to Nigeria came visiting the other day to pledge further assistance to the state of Osun.

“From all of the above, we have no doubt that our governor is on the threshold of a distinguished career in governance that will astound friends and confute foes in the coming months and years.

“So, by celebrating this birthday event with the state governor, the APC family7 is not only making a statement of delight and confidence in the governor’s ability to govern exceptionally well,

“We are also indicating our belief that Osun will be very much better than it is today through the wonderful service delivery capability of the APC governor of the state of Osun”.

And in conclusion the APC pledged “absolute support for Governor Oyetola and his newly assembled cabinet.

“It is also our hope that the people of Osun will be enthusiastic in working with the Governor to achieve optimum success for our state,” the APC declared.

Vice president Yemi Osinbajo: Yorubas and their self destructive conspiracy.