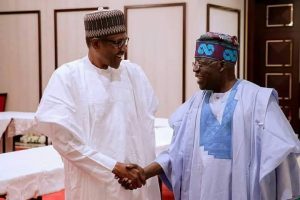 President Muhammadu Buhari sends warm felicitations to the National Leader of All Progressives Congress (APC) Asiwaju Bola Ahmed Tinubu on his 67th birthday, March 29th, 2019, describing him as one of the strong pillars of Nigeria’s democracy.

President Buhari joins the APC family in celebrating the Asiwaju of Lagos, who is also the Jagaban of Borgu Kingdom in Niger State, for his selflessness in serving his country, and making life better for many.

The President recalls some of the sacrifices of the party chieftain to include standing up against injustice in 1993 when the June 12 elections were annulled, which led to his going on political exile for many years, and a protracted legal battle with the Federal Government when funds for Lagos were withheld.

President Buhari affirms that Asiwaju’s uncompromising posture in the face of injustice and refusal to follow the path of least resistance for personal gains stand him out today as a rare breed and one of the cornerstones of Nigeria’s democracy, especially with his track record of persistence, consistency and effective leadership.

As the father of modern Lagos State, the President commends the visionary and inclusive leadership style that the Asiwaju provided for the commercial nerve centre of Nigeria for eight years, laying the foundation for a modern and technologically driven city, and ensuring that every successive leader in the state sticks with the masterplan of a greater Lagos.

President Buhari rejoices with family members, friends, political and business associates of the Jagaban on this auspicious milestone, which is further brightened with the many successes recorded at the recently concluded polls by his strong leadership.

The President believes the best years of the APC National Leader are still ahead, praying that the almighty God will grant him longer life, good health and more wisdom to keep serving the country he loves so much.

WE ARE NOT RECRUITING INTO CIVIL SERVICE – OSUN GOVT