Fresh!!! Atiku makes way back to Nigeria, after failure to secure U.S assurance not to get arrested???

Fresh!!! Atiku makes way back to Nigeria, after failure to secure U.S assurance not to get arrested??? 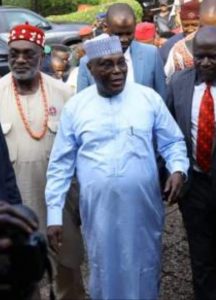 Atiku Abubakar, Peoples Democratic Party (PDP) in the 2019 presidential election, is said to have quickly made his way back to Nigeria from the U.K, where he had hoped to secure assurances from the US Department of Justice, that he wouldn’t be arrested, when he enters the United States.

Earlier on Saturday evening, online news platform, TheCable in an exclusive report, claimed that Atiku, through former President Olusegun Obasanjo, had been issued a US visa. The former vice President was said to have travelled to U.K, with hopes to enter into the United States from there.

However, according to a group, Initiative To Save Democracy, Atiku, who has never travelled to America in 13 years, had on Thursday travelled to the UK, upon getting an American Visa to proceed to the country, from the U.K.

In a statement signed by its president, Akinloye James, the British government informed the presidential candidate that, the U.S Department of Justice explicitly stated that, it can’t guarantee that Atiku wouldn’t be arrested, if he set foot on the country’s soil.

According to the group, Atiku, having failed to secure the assurances of the British government and avoiding arrest by the International Police (InterPol), quickly came back home.

“His mission in the United Kingdom is to get the British Government to help him secure the assurances of the United States Department of Justice that he will not be arrested upon setting foot in US soil. But the British government is reported to have informed Abubakar that the US Department of Justice has made it clear that it cannot guarantee he will not be arrested.”

It is common knowledge that since the Williams Jefferson corruption case of 2004, Atiku has refused to travel to the United States.

Jefferson, a US congressman, Williams Jefferson who indicted Atiku, in the money laundering case, has since served jail term and made to refund part of the money traced to him.

His Excellency State of Osun Deputy Governor Benedict Olugboyega Alabi, his wife, Mrs Titilola Alabi, Former Speaker of the House Representatives Mrs Olubunmi Etteh, Chairman Irewole Local Government Remi Abass and many other notable dignitaries at the Holy Cross Catholic Church Sango, Ikire for Thanksgiving Service to Welcome New Government and to pray for the progress of the state of Osun.