The Osun Progressives(TOP), a caucus of the All Progressive Congress in the State of Osun, has said that without cohesion and effective management of the party, it might takes more than ordinary effort for APC to win future elections in the state. 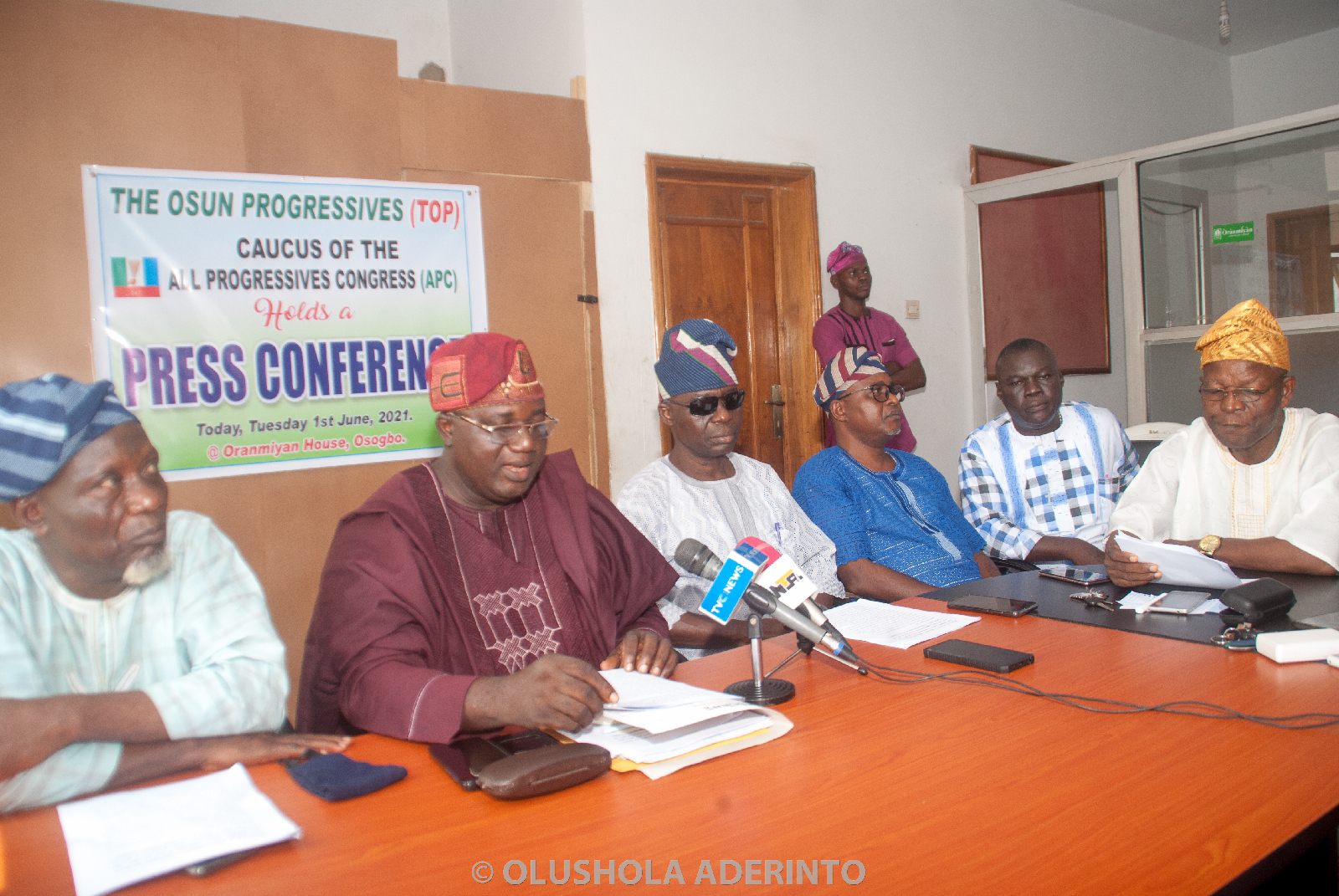 Cross section of TOP Executives during their Press Conference today

According to TOP, members of the APC are frustrated, while some elders and stakeholders of the party put on a nonchalant attitude towards redeeming the “unacceptable state of affairs in”.
The group said there was a a clear danger which could have debilitating effects on the electoral fortune of the party.
Addressing a Press Conference in Osogbo today,  the group, led by its Chairman,  Reverend Adelowo Adebiyi,  said its members are genuinely concerned APC patriots wishing to strengthen the party.
Adelowo said TOP is not a splinter group as being mischievously branded, but a caucus within the APC that wants to correct the anomalies in the party.
He further stated that the caucus had to intervene because the state of affairs of the party is not heart warming and the structure is weak while the leadership overwhelmed with it’s management.
Adelowo said: “Parties are made up of caucuses. Egbe Omo Oduduwa metamorphosed into the Action Group (AG) in the run up to the First Republic and remained a caucus in the party. The tcommittee of Friends as a caucus was the anvil upon which the UPN was formed and has remained so in the successor legacy of Unity Party of Nigeria (UPN) in the second republic.
“The Alliance for Democracy (AD), the Action Congress of Nigeria (ACN) and now the APC were all preceded by caucuses of different lives”
“The APC national has many caucuses, just as the state branches of the party have caucuses. Oranmiyan was the platform on which the progressive reclaimed power in Osun in 2010 and remained a caucus in the party. Govenor Adegboyega Oyetola came into power on the platform of Ileri Oluwa which has also remained a caucus in the party.
“We therefore want to state in clear terms that we are not a splinter group that the enemies are associating us with, but genuine concerned party patriots wishing to have a great progressive platform in the party. TOP exists to correct the observed anomaly in APC, which other existing caucuses like Agba Osun turned blind eyes to, and strengthen it for the good of all”.
The Chairman added:  “The state of affairs in the party today is not heart-warming, as the structure is weak and the leadership seams overwhelmed with it’s management.
“There are no regular meetings at whatever level, where opinions, views and ideas could be aggregated while members are fragmented with unsynthesised outlook towards party ideas. Not an exaggeration, APC members are frustrated.
“It is clear now that Osun APC is being run arbitrary with the rule of thumb as dictatorial tendencies of the party leadership has put several members off, to the extent of their becoming nonchalant towards the party.
“As at today, without internal cohesion and commitment to party ideas, the APC may need more than ordinary efforts to win elections in the state. It is rather sad that party elders and stakeholders put on a nonchalant attitude towards redeeming this unacceptable state of affairs in APC, a clear danger which could have debilitating effects on our electoral fortune”.
Adelowo said TOP mission is not to weaken the party but to strengthen it.
Also speaking at the event, the Secretary of the Party in the State, Hon. Rasaq Salinsile said he is surprised at the level of noise generated since the formation of TOP, adding that APC in the state has over 300 interest groups with more still encouraged.
He said: “In APC, we have over 300 interest groups that the party recognized. The party is even encouraging more groups to spring up. I wouldn’t know why the emergence of TOP is generating so much noise.
“The Osun Progressive is not competing with APC as a party. It is a caucus within the party and I want to appeal to the audience to help correct the wrong notions of those who have been misinformed”.
Post Views: 39
0 comment
1
FacebookTwitterGoogle +PinterestLinkedinTumblrRedditStumbleuponWhatsappTelegramEmail