Governor Adegboyega Oyetola has commended market men and women in the State for adhering to the stay at home order which lasted more than four weeks.

Governor Oyetola gave the Commendation when he paid a surprise visit to the ever busy Igbona market. 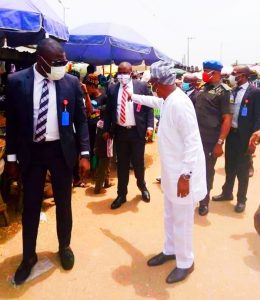 Mr Oyetola thanked buyers and sellers at the market for helping to control the spread of the virus in the State by staying away from the markets despite the harsh economic realities.

He saluted their courage and support for the Government in tackling the virus as markets are veritable source of community transmission of the fatal disease,stressing that with the markers shut according to the Government’s directive,
the State’s ranking has dropped on the NCDC’s list of infected states.

The Governor thereafter advised the market men and women as well as their customers to continue to maintain personal hygiene, use their nose covers and sanitizers and avoid direct contact with anybody.

He also counselled them to avoid crowding on public buses while taking their goods to and from markets as the Government had warned minibuses not to carry more than two passengers on a row of seat.

The women were enthusiastic on seeing the Governor and promised that they would continue to abide by the instructions relating to Covid-19 in their own interest,for their own safety and in the interest of the State.

Oyetola Mourns Balarabe Musa, describes him as a...