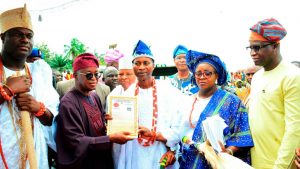 Osun State Governor, Adegboyega Oyetola has solicited the cooperation of the citizens particularly the traditional rulers on the need to pay their taxes regularly.

Oyetola called on the royal fathers to serve as bulwarks of socioeconomic development by encouraging productivity and hard-work among their subjects since only a productive population can add value to the economy of the state.

He said the call is necessary to help the administration actualise its dreams of boosting the revenue profile of the state. 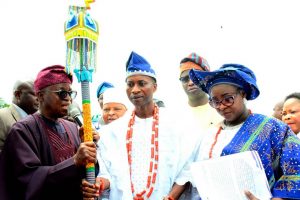 Governor Oyetola spoke on Thursday during the presentation of Staff of Office and Instrument of Appointment to the newly appointed Olulamokun of Yakooyo, Oba Meschack Oyewole Oyediran, at Yakooyo, Ife-North Local Government Area.

He said the government will remain faithful to its avowed commitment to make life bearable for all citizens.

The governor urged the monarchs to support all the lofty policies and programmes of the administration designed to move the state forward.

He further implored the traditional rulers to work in partnership with the government and security agencies, saying the government would continue to count on their support in the maintenance of peace, security, law and order. 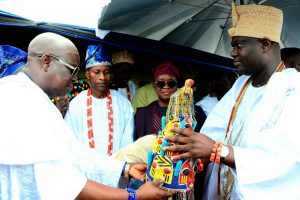 “Let me seize this opportunity to thank the good people of Ife North Local Government for your support for our administration. I solicit more of your cooperation and prayers.

“The task of governing Osun and delivering the dividends of democracy is not a one-man show. It is the responsibility of all, which calls for involvement of all.

“I, therefore, enjoin you all to pay all taxes and rates as and when due. I urge you to cooperate with the Chairman, Leader of the House, Councillors and workers of Ife North Local Government as they continue to deliver the dividends of democracy to your doorsteps in fulfilment of the promises of our great party, the All Progressives Congress (APC).

“I urge all indigenes of Yakooyo to re-dedicate themselves to efforts which will promote the growth and development of the community.

“Those who live outside should be encouraged to come home to tap the human and material resources which abound. This will go a long way in complementing the effort of the state and Local Government in transforming Yakooyo and lifting it to a pride of place.

“Government on its own part will remain faithful to its avowed commitment to make life bearable for all citizens of the State.

“To all our revered royal fathers gathered here this morning, my administration counts on your support in the maintenance of peace, security, law and order in our various communities.

“I enjoin you to work with the various security agencies and the Council Chairmen to ensure that the lives and property of our people are safe and our communities are not invaded by undesirable elements.

“Our royal fathers should also encourage all their subjects to be meaningfully engaged in one economic task or another.

“In this way, we will ensure that no one will become an idle hand to be used by the devil in disrupting the peace currently being enjoyed in our state”, Oyetola said.

He enjoined the new traditional ruler to see himself as the father to all and endeavour to carry everyone along in the administration of his community.

He further said “Ensure that you listen to your people. Let them feel the love and affection you have for them. Always strive for the growth and development of your people. I pray that the Almighty God will endow you with the wisdom and strength to pilot the affairs of your people”.

Earlier in his remarks, the Ooni of Ife, Oba Adeyeye Enitan Ogunwusi, lauded the administration for being responsive and responsible to the people’s needs.

Oba Ogunwusi appealed to the state government not to relent in its efforts to take the state to next level of development.

He urged people of Yakooyo and Ife in general to continue to support things that can promote peace, unity, togetherness and as well take the state in general and Ife in particular to greater heights.

Also, the Chairman, Ife-North Local Government, Mr. Orosanya Taiwo Hassan, commended the administration for being passionate about the welfare of the people.

He pledged his administration’s commitment to support the programmes and policies of the state government.

Hassan called on the people of the town to continue to support the All Progressives Congress (APC) led government and as well rally round the new traditional ruler, saying his success is the success of all.

The President, Yakooyo Progressive Union, Prince Adewale Adeloye Oyebowale, called on the residents of the town to work in one spirit and accord to move the town forward.

Oyebowale who admonised the people of the town to shun sentiments and things capable of tearing them aparts, implored them to support the selection, appointment and installation of the new monarch.

Responding, the newly installed monarch, Oba Meschack Oyewole Oyediran, expressed profound gratitude to Governor Oyetola, the Ooni of Ife and the good people of the town for the honour bestowed on him to ascend the throne of his forefathers.

He promised to put in his best to advance the socioeconomic life of the people of the town and the state as a whole.