Popular Posts
The Story Of Attah Ameh Oboni – the...
The state of Osun Anthem,Yoruba and English.
Opon Imon (Tablet of Knowledge)Read this carefully from...
King (Dr) Saheed Osupa 58 Albums between 1992...
The Biography of the Alaafin Oyo his imperial...
Gists

Osun State Governor, Adegboyega Oyetola has called on wealthy sons and daughters of the state to channel their influence and wealth toward supporting the government in developing their respective communities. 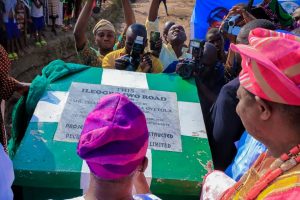 He made the call on Friday while inaugurating  the Old Ileogbo-Iwo road.

The 3.85 kilometer road was flagged off by the governor in March, 2019 in furtherance of his earlier approval for the construction of the road, which was singlehandedly facilitated by Engr. Abel Adeleke as his contribution to the development of his community. 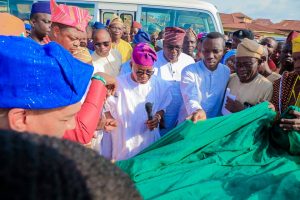 The governor lauded the philanthropic gesture of Engr. Adeleke in using his position at the Peculiar Group where he works to influence development in his community.

He said, “The road project is a product of philosophy and personal sacrifice by a well-meaning son of Ileogbo, Engr. Abel Olanrewaju Adeleke.

“On behalf of the government, the people of Ileogbo in particular and Osun in general, I thank Engr. Adeleke for this huge contribution to the socioeconomic development of Ileogbo and its  environs.

“This is a commendable community development endeavour that government cannot take for granted since government alone cannot provide all the needs of the people. 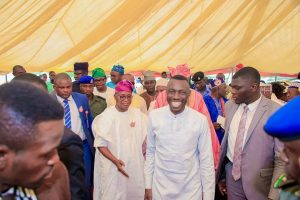 “I therefore call on other towns as well as wealthy indigenes of our state to emulate this gesture to make massive development achievable in the state.

“As you are all aware, massive construction, rehabilitation and upgrading of roads are critical to the Development Agenda of our government and we are using them as the drivers of the economic transformation of the state. 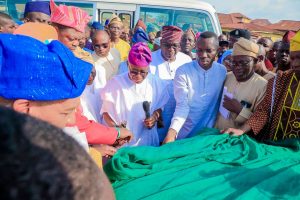 “Our administration has commenced the rehabilitation of Osogbo-Iwo Road. This road shall transform the transportation and the socioeconomic status of the people of adjoining local governments”.

Earlier, the people of the community, who spoke through Honorable Mukaila Oladejo and their monarch thanked Mr. Governor for the support in approving the construction of the road which he also personally flagged off eight months ago.

They maintained that the governor’s personal presence signifies his love for the people of Ileogbo community and the state in general, adding that the governor has given developmental projects a top priority.

Also in his remarks, Engineer Abel Adeleke said the road project was a product of Corporate Social Responsibility of the Peculiar Group as part of the Alternative Project Funding Approach being adopted in four states of the country. 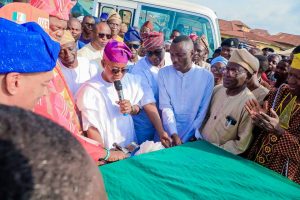 “I want to appreciate everyone for making out time to be part of this historic event. I thank Mr. Governor for his support in approving the project, which he came personally in March to flag off.

“Peculiar Group as an Engineering company has started a programme tagged ‘Alternative Project Funding Approach’ which allows the company to take up building and construction projects for the governments and get paid later. This is being adopted in four states of the country. 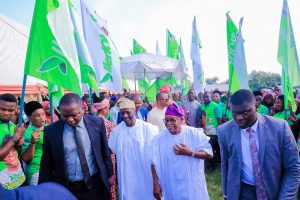 “Within the Alternative Project Funding Approach, we have the Corporate Social Responsibility, which gave birth to this project being commissioned today,” Adeleke noted.

Adeleke said the approximately four kilometer road is 100mm thick, but with drainage of 700 meters and a lifespan of a minimum of ten years. 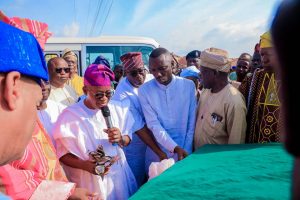 The Supreme court decision on PDP appeal,affirmation of popular will of Nigerians – Garba Shehu.