My being governor today is by providence–Governor Gboyega Oyetola.

MY BEING GOVERNOR TODAY IS BY PROVIDENCE- OYETOLA.

OLUWAMAYOWA A. FAGBOHUNGBE
OFFICE OF THE GOVERNOR OF OSUN

Governor Gboyega Oyetola has said his attainment of the highest position in the State of Osun is exclusively by providence, stressing that he was convinced beyond any reasonable doubt that the promise of God Almighty has materialized in the Land of Virtue. 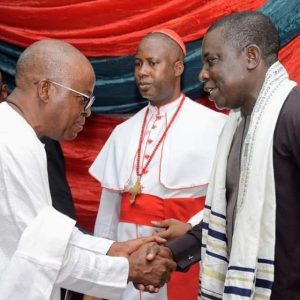 The Governor stated this on Sunday at the Victory, Praise and Peace Thanksgiving Worship organized by the Government House Chapel, Okefia, Osogbo.

Governor Oyetola told the congregation that the hitch free elections recorded in the state is a strong affirmation that Almighty God domiciles in Osun, little wonder he never fails him, his administration and the good people of Osun at large. 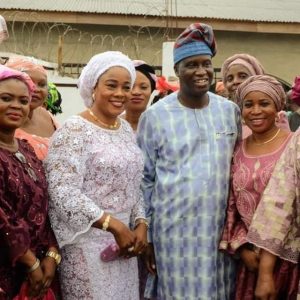 Mr. Oyetola who made references to the Holy Bible and Quran where Jesus Christ and Mohammed faced all manner of challenges but surmounted all while on earth, maintained that despite the seeming storm and wind that blew, God Almighty has never forsaken him.

The Governor appreciated God for the peaceful atmosphere, religious harmony and unity of purpose existing in the Land of Virtue, commending the Men of God for not resting on their oars in praying for peaceful coexistence in the state, assuring the people of Osun that he is hopeful that Almighty God will see the present All Progressives Congress (APC) led administration in the state through in its quest to take the State of Osun to the promised land. 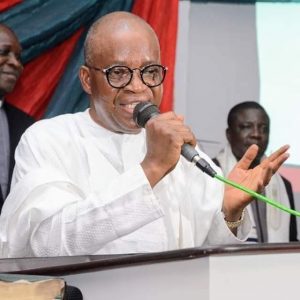 Governor Oyetola enjoined all elected public officers to guide their opportunity to serve jealousy, knowing fully well that everyone of them is accountable to the people, hence, the need for them to be up and doing so as to deliver on the promises made while canvassing for their support.

In his sermon at the service, the Coordinating Chaplain, Government House Chapel, Osogbo, Rev. Dr. Testimony Onifade said the programme was designed to appreciate Almighty God for his unprecedented mercies showered on the state thus far.

Rev. Dr. Onifade enjoined the people of Osun to join hands with the present Gboyega Oyetola’s administration in his quest at taking the State of Osun to the promised land.

Highpoint of the programme was the thanksgiving session which saw the Governor, his darling wife, the Deputy Governor leading other dignitaries at the service to dance to the altar in appreciation of God’s faithfulness over the present administration and the state at large.

CAN’S demands on National assembly leadership NSCIA responds to their shameless demands. Here is the response and it makes a good read!!!