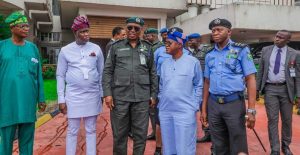 Governor, State of Osun, Mr. Adegboyega Oyetola has restated his support for community policing which he stressed is the only way to ridding the country from every form of crime and criminality.

Mr. Oyetola stated this on Thursday while playing host to the Deputy Inspector General of Police in charge of Operations, DIG Abdulmajid Ali in his office in Osogbo.

The Governor told the visiting DIG Abdulmajid Ali that he has always been an advocate of Community Policing, suggesting that the recruitment and training of candidates willing to join the Force be done at their Local Government Areas (LGA) of origin, after which they should be deployed to the same locality to serve, maintaining that the fact that they are serving at an environment they are very conversant with, nipping in the bud of crimes and criminality in such locality will be much easier. 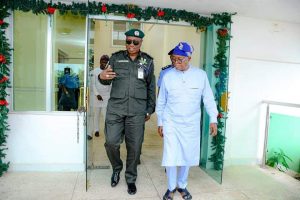 The State Helmsman stated that his administration is on the verge of sanitizing the mining sector with a view to sending to extinction criminals operating under the guise of engaging in mining activities and protecting the environment which has suffered severe degradation.

Governor Oyetola who suggested focusing on the usage of drones which he said will assist greatly in locating hideouts of criminals, informed the delegation that collective action of the Southwestern States in tackling crimes being coordinated by the Development Agenda for Western Nigeria (DAWN) Commission is ongoing, which he said is with a view to ensuring the achievement of lasting peace and tranquillity in the region.

Governor Oyetola commended the present Muhammed Abubakar led Nigeria Police Force for exhibiting great commitment to achieving peace in Nigeria, particularly the Southwestern part of the country, and for supporting the state in terms of ensuring that Osun maintains her status as the most peaceful state in Nigeria.

Earlier in his remarks, the visiting DIG Abdulmajid Ali told the Governor that he was in the state on the directive of the Inspector General of Police, IGP Muhammed Abubakar to go round the Southwestern Nigeria to see the security architecture on ground.

DIG Ali said the Nigeria Police Force need to partner with Governments at all levels and the people to make achievement of security realizable and successful.

DIG Ali informed the Governor that a special team comprising of newly recruited men of the Nigeria Police Force exclusively dedicated to the Southwest is presently on training and will soon be deployed, assuring Governor Gboyega Oyetola that crimes and criminality in the region will soon be completely eradicated.

Present at the meeting were the Deputy Governor, Mr. Benedict Gboyega Alabi, the Secretary to the State Government, Prince Oluwole Oyebamiji, the State Head of Service, Dr. Olowogboyega Oyebade and the State Supervisor for Home Affairs and Tourism, Dr. Obawale Adebisi.

Nigeria is proud of you, Buhari tells Akintola at 100