You are a distinguished cerebral,humble and purposeful young professional in politics – Ooni of Ife eulogizes Hon Tunde Lekan Olatunji.

Presenting the plague of Honour to Mr Tunde Olatunji, the Arole Oodua, Ooni Adeyeye Ogunwunsi described the Osun Assembly Chief Whip as a distinguished, cerebral,humble and purposeful young professional in politics who is beaming light of hope on the current generation.

Oba Ogunwunsi said, ” the likes of young, vibrant, discipline, purposeful, focused and knowledgeable people like Honourable Tunde Olatunji has rekindled the hope of the possibility of quality and conscientious leadership that would transform the society “. 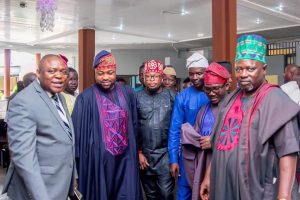 Responding, the awardee, Mr Olatunji who expressed his phobia and restraint for awards, declared that he felt highly honoured to be so conferred, stating that he has been spurred to continue in the pursuit of that which would be for the general good of the people alone.

Mr Olatunji who seized the opportunity to comment on the topic of the ” distinguished lecture” which was on National security and good governance, contended that there was a need for a scientific paradigm shift in the security discourse of Nigeria, as such that would contemplate the place of the consequences of Climate Change, which is responsible for decline in natural resources and promoting indiscriminate migration and restiveness. 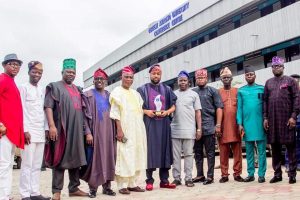 Earlier in his welcome address, the Rector of Ife Business School, Dr Makinde Adereti told the gathering that the choice of Mr Olatunji for the Exemplary Leadership Award was a product independent sampling and fact checking on his integrity in private and public office,capacity and performance. 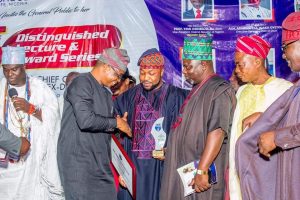 In the lecture titled,” Improving the State of Security in Nigeria through good Governance and Innovative Leadership, the Chief of Defence Staff, General Gabriel Oloninsakin who was represented by the Chief of Defence Civil-Military Relations, Rear Admiral Oben Ingalaba pointed out that the military and other security agencies in Nigeria had drastically curtailed threats to National Security through their various operations nationwide.

General Oloninsakin however noted, that violent military engagement alone could not solve security challenges of the contemporary times, hence the military is improving its relationship with the civil populace to build confidence for genuine information sharing and crime prevention.

In her own paper presentation, Chairman of the National Board for Technical Education NABTE, Professor Modupe Adelabu who submitted that innovative leadership and good governance were key to a nation’s security, advocated that public institutions in Nigeria should run beyond partisanship, self interest, showmanship,brigandage but absolute respect for the rule of Law.

The host Governor, Mr Gboyega Oyetola who was represented by Professor Olalekan Yinusa called on Nigerians to support the government in securing the nation and entrenching the ideals of governance and Innovative Leadership for sustainable development.