The Yoruba States’ Joint Police Force to protect the region from kidnapping and other forms of crime is set for takeoff.

‘Amotekun’, the joint security outfit was conceived in July at the height of serious security challenge in the region. But its commencement was delayed due to hitches in the recruitment of personnel and the need to review operation guidelines. 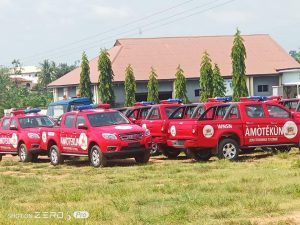 Tagged: ‘Operation Amotekun’, the outfit is a product of the security summit organised by the Development Agenda for Western Nigeria (DAWN) Commission on behalf of the six governors in June. The summit was organised in response to the wave of kidnappings, armed robberies and other forms of criminality which peaked in the region at the time.

The governors reasoned that a joint regional security outfit was necessary to confront crimes and prevent its continuation. But the security challenge has subsided as a result of individual efforts by the states.

Operation Amotekun will be a two-layer operation – at the central level and at the local level.

One hundred and twenty vehicles will be deployed for the central operation with the headquarters in Gbongan, Osun State on the Ibadan-Ile-Ife highway.

Each of the six states of Oyo, Osun, Ogun, Ondo, Ekiti and Lagos will supply 20 vehicles.

According to the plan, the personnel for the operation will be made up of local hunters, members of vigilance groups specifically hired, men of the Nigerian Security and Civil Defence Corps (NSCDC) and the Oodua People’s Congress (OPC).

The outfit will be managed by a regional committee that will comprise representatives of each state. The committee’s office is expected to be sited in Ibadan, the Oyo State capital.
The police component will be headed by an assistant commissioner of police.

A source close to the project said that the six states are ready for Amotekun’s inauguration. All huddles, it was gathered, have been cleared.

The states have each procured 20 patrol vans, equipped with communication and security gadgets. Other security vehicles procured by the states will be deployed for state-based operations. This will ensure that criminals are choked in, unable to escape from one state to another.

According to the source, the vehicles for the operation will be brought to Ibadan for branding and inauguration on January 9, unless there is a last-minute change of plan. The operational bases for Amotekun in each state is also ready.

Journalists who visited the Olajokun Park on the Ibadan-Ife expressway at Gbongan, which will serve as the operational base for Amotekun, observed that rehabilitation work had commenced. Weeding of the compound is almost done with, while the buildings are being painted.

The copy of the Standard Operating Practice (SOP) is being reviewed by the governors.

The final submission will be fine-tuned by a committee, including representatives of DAWN Commission for the final draft to be approved by the governors before the outfit is unveiled.

Another source close to the project explained that the ongoing review would re-examine the mechanism and tools to be used and the oversight functions of Amotekun in relation to conventional security agencies.

“If all these are not properly defined, Amotekun will take off on a faulty foundation.” The source added.

The reviewed document is expected to be endorsed by all stakeholders, led by Ondo State Governor Rotimi Akeredolu, who is the chairman of the Southwest Governors’ Forum, before January 9.