We Must SET Forth Now For An Improved Internal Security – Aregbesola.

We Must SET Forth Now For An Improved Internal Security – Aregbesola. 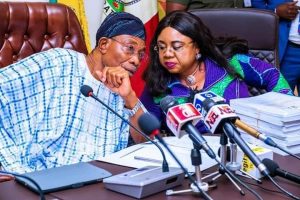 The charge by President Muhammadu Buhari to secure the lives and safety of all Nigerians, create enabling environment for economic sustainability and institute a transparency culture, which is embedded in the SET (Security, Economy and Transparency) agenda, must start immediately, so says the new Minister of Interior, Ogbeni Rauf Aregbesola.

He said this while formally taking over the affairs of the Ministry from the Permanent Secretary, Barr. Georgina E. Ehuriah, who had been acting since 28 May 2019. And the Interior Ministry, being a pivotal component of this thrust, must be in the lead.

Hear him: “this is a very important Ministry with gargantuan responsibility for the maintenance of internal security, safety, protection of lives and property, and economic development of our nation. From antiquity and political philosophy, the primal responsibility of Government is the welfare of the people, protection of lives and property and maintenance of peace. It is the foundational responsibility on which other responsibilities are built. This is the basis on which we campaigned and Nigerians voted for us. It is a sacred mandate we are fully determined to deliver on.” 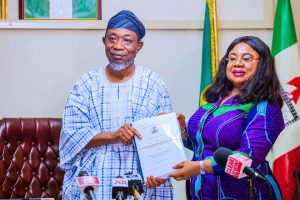 Aregbesola said, though insecurity is a global phenomenon, but there are challenges that are peculiar to Nigeria. These include insurgency, militancy, armed banditry, cyber crimes, kidnapping for ransom, ritual killings, pipeline vandalism, drug trafficking and abuse, hate crimes, ethnic religious bigotry among others.

He therefore enjoined each agency under the ministry with its unique and distinct responsibility, to be fully prepared to face these challenges head-on, thereby fulfilling the policy thrust of President Buhari as encapsulated in the SET agenda.

He promised to make the welfare of all staffers in the Ministry as well as those in the four Services, a priority in his tenure. He equally promised to remove any impediments that are likely to jeopardize the smooth operation and deliverance of the SET goals. The former two-term Governor of Osun State, where incidentally, the State became the safest State in Nigeria by the time he left office in November 2018, called on all the staff and management of the Ministry, to return Nigeria as a whole to that secured place it was, before the current challenges. 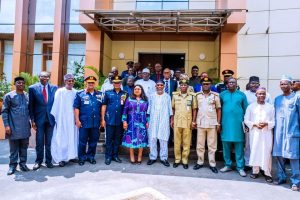 Earlier, while handing over the instrument of office to the new Minister, the Permanent Secretary, Permanent Secretary, Barr. Georgina E. Ehuriah, once again reinstated the desire and willingness of the Ministry and the four Services to key into the SET agenda of Mr. President. She said the handing over notes contained inputs on the internal security of the nation and the achievements of the Ministry so far. SHe expressed confidence in the leadership of the new Interior Minister whom she described as unrelenting in the quest for success.