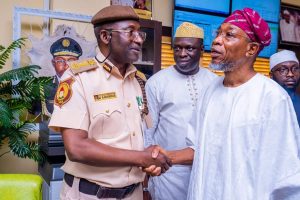 Security, Economy and Transparency, SET, is the new narrative that is set to drive the security agenda for the country, and the Ministry of Interior being the first line of action, is expected to lead the charge, so says the new Minister of Interior, Ogbeni Rauf Aregbesola.

He made the assertion yesterday, while paying familiarization visits to two of the parastatals under his Ministry, the Nigeria Security and Civil Defence Corps, NSCDS and Nigeria Immigration Service, NIS. 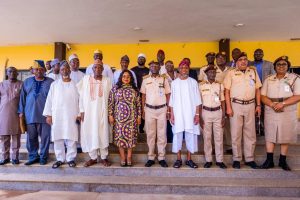 “As a result of our commitment to a proactive security agenda for the country ,we are going to set up an early warning-alarm system in all the geopolitical zones, in other to nib in the bud any security breach before it happens”.

Earlier, the Permanent Secretary in the Ministry, Barr. Georgina Ekeoma Ehuriah, MON, said, given the achievements recorded as the Governor in the State of Osun, she had no doubt that the Minister would make remarkable impacts in the Ministry in order to curb insecurity in Nigeria.

In his remarks earlier, the Commandant General of NSCDC, Abdullahi Muhammadu, stated the readiness of his agency to provide the needed intelligence for proactive measures as demanded by the Minister and promised the cooperation of his team. 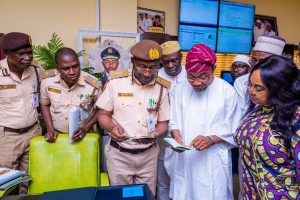 At NIS, Aregbesola, reinstated his commitment to institute a culture of rewarding excellence and charged the agency not to retrogress from the flagship security agency that it has become.

Taking the Minister round some of the commissioned and ongoing projects at the headquarters, the Comptroller General NIS, Muhammad Babandede, said the agency can easily now register and data-capture all immigrants in the country. He also informed the Minister that passport can now be issued within 48 hours of application.

The familiarization visit by the Minister to other parastatals under his Ministry, continues today.

My relationship with your ministry is distant – Ogbeni Rauf Aregbesola,the honorable minister of interior.

The face of captain Abdulahi Balarabe,the killer of the IRT