Violence Against Nigerians in South Africa Must Stop…SRJ. 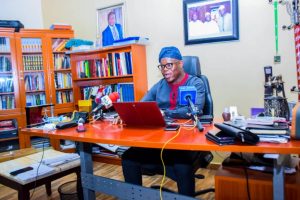 The unending and escalating pattern of selective killings of Nigerians in South Africa has not only reached a crescendo but is getting progressively worse.

The report of the death of yet another Nigerian, 46 years old Pius Ezekwem, in the hands of eight South African Police officers last weekend in the Eastern Cape Province of South Africa is another sad tale and, it must be thoroughly investigated owing to the fact that it was purportedly carried out by personnel of the South African Police.

We urge President Muhammadu Buhari to, as a matter of urgency, convene a stakeholders meeting on the modalities to be employed in stemming the worrisome tide of the unwholesome and recurrent killings of Nigerians in South Africa.

A meeting with the President of South Africa on this issue by our President will not be out of place.
We reiterate our stand at the Senate Committee on Diaspora, Non-Governmental Organisations and Civil Societies that acts of violence against Nigerians home and abroad must stop.

Violence debases humanity and our people are getting restless and at the end of their tethers.

While we commiserate with the family of Mr. Pius Ezekwem on the demise of their son from the unbridled acts of people who were trained to protect lives and property, we appeal to his family and our brothers and sisters in South Africa to stay calm and eschew violence as the Government of Nigeria will take up the matter and ensure that justice is served as appropriate on this most recent killing.
Thank you.
__________________________
Senator (Dr) Surajudeen Ajibola Basiru
(Chairman, Senate Committee on Diaspora, Non-Governmental Organisations and Civil Societies

How i made my first Million – Jagaban Bola Ahmed Tinubu.