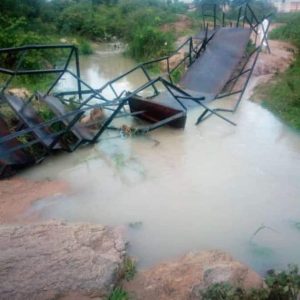 .
.
Two students of the Abubakar Tafawa Balewa University Bauchi (ATBU) drowned on Tuesday when a bridge within the campus in Gubi, Bauchi State collapsed.
The incident occurred around 12:00am when some of the students were leaving the campus after reading overnight for exams.
The bridge, which linked the university and the hostels, was reported to have collapsed under the current of the water underneath.
Our correspondent, who visited the scene of the accident, saw some of the security personnel and students searching underwater where the iron bridge collapsed.
It is believed three students drowned during the incident according to eyewitnesses.

We are going to make more appointments of permanent secretaries – Oyetola