Popular Posts
North-West, South-West lead as INEC registers 96.2 million
BREAST SUCKING; IS BENEFICIAL FOR ADULTS.
The Biography of the Alaafin Oyo his imperial...
The biography of Dr Richard Adekola Idowu and...
June 12: A milestone for Democracy By Asiwaju...
Cultural

Yoruba culture consists of the folk/cultural philosophy, the autochthonous religion and folktales. They are embodied in Ifa-Ife Divination, known as the tripartite Book of Enlightenment or the Body of Knowledge in Yorubaland and in Diaspora. Other components of the Book of Knowledge or the Book of Enlightenment are psychology, sociology, mathematics, cosmogony, cosmology, and other areas of human interests. 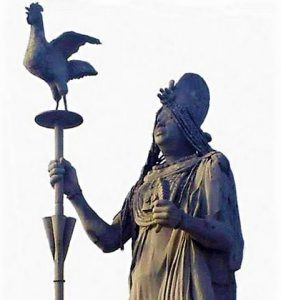 Yoruba cultural thought is a witness of two epochs. The first epoch is an epoch-making history in mythology and cosmology. This is also an epoch-making history in the oral culture during which time divinity-philosopher Orunmila was the head and a pre-eminent diviner. He pondered the visible and invisible worlds, reminiscing about cosmogony, cosmology, and the mythological creatures in the visible and invisible worlds. Divinity-philosopher Orunmila epitomizes wisdom and idealism. But he is more of a psychologist than a philosopher. He is the cultivator of ambitions and desires, and the interpreter of ori (head) and its destiny. The non-literate world, compelled by the need to survive, impelled by the need to unravel the mysteries of the days and nights made divinity-philosopher Orunmila to cultivate the idea of Divination.

The second epoch is the epoch of metaphysical discourse. This commenced in the 19th century when the land became a literate land through the diligence and pragmatism of Dr. Bishop Ajayi Crowther, the first African Anglican Bishop.He is regarded as the cultivator of modern Yoruba idealism.

The uniqueness of Yoruba thought is that it is mainly narrative in form, explicating and pointing to the knowledge of the causes and nature of things, affecting the corporeal and the spiritual universe and its wellness. Yoruba people have hundreds of aphorisms, folktales, and lore, and they believe that any lore that widens people’s horizons and presents food for thought is the beginning of a philosophy.

As it were in the ancient times, Yoruba people always attach philosophical and religious connotations to whatever they produced or created. Hence some of them are referred to as artist-philosophers. This is an accretion to the fact that one can find a sculptor, a weaver, a carver or a potter in every household in Yoruba land.

Although religion is often first in Yoruba culture, nonetheless, it is the thought of man that actually leads spiritual consciousness (ori) to the creation and the practice of religion. Thus thought/philosophy is antecedent to religion.

Today, the academic and the nonacademic communities are becoming more and more interested in Yoruba culture, its Book of Enlightenment. Thus more and more researches are being carried out on Yoruba cultural thought, as more and more books are being written on it—embossing its mark and advancing its research amongst non-African thinkers such as the political philosophers and political scientists who are beginning to open their doors to other cultures, widening their views.