The face of captain Abdulahi Balarabe,the killer of the IRT

Meet Capt.Tijjani Abdullahi Balarabe from Taraba State  He is responsible for the death of IRT 3 while rescuing Whadume, the Ibi, kidnap kingpin. 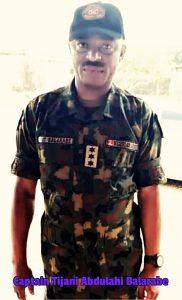 Captain Tijjani Balarabe is an indigene of Taraba State. A very controversial Military Officer who has issues with certificate forgery sometimes in the job. He enrolled through recruitment but was commissioned fully as an Officer after attending the rank of a staff sergeant. He had issues in the Past but was pardon. He is known as Someone who is not far from controversy and not afraid of daring adventures in Life. May be his end is now.

The ARMY CAPTAIN is said to be from TARABA State with some people relating him with the Danburam Family in Jalingo. Some few years back he was serving in Maiduguri and his Team was attacked by BokoHaram. Tijjani sustained serious injury in his leg which took him time to healed. He was posted to Abia State, while in Abia it was learnt that he assaulted the Wife of his superior and was posted back to TARABA STATE as part of the punishment.

-CAPTAIN Tijjani is From TARABA State

-The Kidnap kingpin Hamisu BALA Wadume is From TARABA State

-Two Out of the Three gallant IRT Police officers that lost their lives in that ugly encounter are from TARABA State..