The Autobiography of the late Olu of Olorunsogo,his royal highness Kareem Olaniyi Akanji, the Ilufemiloye1.

He was born on 1st of July 1952 to the family of Buari Akanji a.k.a (Baba carpenter) and Binutu Akanji of Abogunde’s compound Ede. 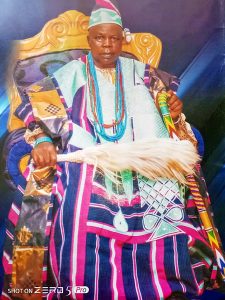 He is the first child of the family of five children from the second wife of Buari Akanji Abogunde who died in may 1975. Oba Kareem Akanji was nurtured by his maternal parent,Mrs Sadatu Oyadoyin Awele Yusuf (a.k.a Iya Elere) of Oloba’s compound Ede who brought him from his mother in Ile Abogunde to Ile Oloba lo live with her and other grandchildren.
His grandmother, Mrs Sadatu Oyadoyin Awele Yusuf forced his father,Buari Akanji Abogunde despite his objection to put the tribal marks on his face to distinguish him from other children living with her. His mother,late Bintu Asani Buari of Ile oniso descendant died on 21st of march 2013. She was a mother in million. Before her death she did all her possible best to see all her children and grandchildren are well educated to realize the dream of her late husband who died in 1975 when the children were yet to be fully educated and out of schools. Today to the glory of God,her dream were fulfilled with engineers,a professor,accountants,a medical doctor, government officials among the children and grandchildren she left behind.

Oba Kareem Olaniyi Akanji started his educational career at the local authority primary school Agbogbe, Ede in 1958 and later moved to local authority modern school to further his education when he could not get admission in to a secondary school in Ede in 1965. In 1968 the search for further studies made him to travel to Ilorin to live with his maternal uncle, Alhaji Akorede Yusuf and luckily for him, he was able to secure admission to Ilorin College Ilorin to start from secondary school class 1.

In 1971 there was an argument between him and one of his mates,Mr Oba Baba Aladiye that he was not brilliant enough to pass the entrance examination to get admission to Government technical school which was exclusively reserved for for students in class 3 and 4. He saw this as a challenge. Oba Kareem Akanji went to obtain the entrance form which was issued to students for free. When the result came out,he led other students in mathematics and this got him admission to study automechanics.
The intention of Oba Kareem Akanji was to study medicine but by Providence the students of Ilorin college rioted at the end of the third term when he was in class 3 and this made the school authority to close the school indefinitely. The school was not open when other students resumed for the new class session. He was advised to resume at the government technical school (GTTS) Ilorin in 1971 temporarily pending when Ilorin college would be reopened. On getting to the government school,he discovered that everything was given free,including daily feedings,toiletries,school uniform and free technical materials and textbooks.
He decided not to return to Ilorin college again where he was living off campus and daily eating Eba and Ponmon (Cowhide). He left GTTS Ilorin in 1974 to work with Philip Morris Ilorin before proceeding to Kwara state college of technology now Kwara state Polytechnics where he graduated with OND and HND in automotive engineering in 1980. He therefore proceeded to do his one year mandatory National Youth Service Corps in Ondp state where he was posted to Nigeria Romania Wood Industry for his primary assignment.
In 2002 he proceeded to federal university of technology (FUTA) Akure for his post graduate studies in mechanical engineering and graduated in 2004.

July 1981-May 1985- Water cooperation of Oyo state as Maintenance officer.

1985-1992- National Electric Power Authority (NEPA) Now Power Holding Company of Nigeria where he was posted to Sapele power station as workshop maintenance officer,he rose to managerial position he left in 1992 to Osun state ministry of works on the order of the late senator Isiaka Adeleke of blessed memory.
1992 July to 2012- Osun state ministry of works as principal Road Traffic Officer before his retirement in 2012 to the glory of God.

In his royal Majesty’s wisdom with due consultations with his sons and daughters he installed him as Ilufemiloye of Olorunsigo from Ede land. He is married to Olori Musili Adeola Akanji and blessed with children.
He joined his ancestors on 17th of September 2019 after six years on the throne.

May his soul rest in peace.