I was heavily blackmailed by the duo of Kazeem Aro and Adeolu Alao (Jake Luis ) , the allegations were grievous, unscrupulous and damaging to the extent that I was alleged to have embezzled over N600m they claimed was traced to my bank account . They wrote a lot of unsubstantiated and unimaginable stuff about my person.

Some of my close associates told these guys to pull down the damaging allegations from their Facebook wall but these guys were adamant, claiming that they had enough evidence against me including details of my banks accounts. I even went to Adeolu Alao (Jake Luis ) facebook wall to call him to order, he told me point blank he was going to nail me with shocking evidence and that he was ready for any legal action I was willing to take against him.

I might be young but I have put in a lot to get to where God has placed me in life . It has been by God’s grace, I am from a reputable family and I have the name of the family to protect at all times. I was seriously embarrassed by the damaging allegations and as a law abiding citizen because I didn’t want to take laws into my hands. I consulted my Lawyer who promptly petitioned the Nigeria Police Force on July 23rd 2019.

You can criticize me, you can call me names but not direct blackmail bordering on financial impropriety aimed at tarnishing my hard earned reputation. I was called all kinds of names in the wake up of Osun APC governorship primary in 2018 by some online group, I was called Adolf Hitler of ijesaland and Saddam Husain of Aregbesola’s cabinet , they claimed I was marketing a bad product whom they tagged IleriEsu , IleriBread , IleriAlagba e.t.c but I didn’t not react because it was all politics and God be praised, the so called bad product is now the performing Governor of the State of Osun.

Kazeem Aro went to the extent of threatening to further expose me with more incriminating documents. Yes I was not moved but I was disturbed because my hard earned reputation was being dented by some riffraff. They even had the effrontery to circulate the falsehood on WhatsApp.

The Police repeatedly invited the duo of Kazeem Aro and Adeolu Alao who had earlier claimed that they had enough evidence to back their claim but to our amusement they never honoured the Police invitation . Infact the Adeolu Alao guy at a point switched off his for phone for so long when he knew he was been tracked by the police . He is still on the run . I appeal to him to please come and substantiate his claim.

Kazeem Aro was picked up by the police yesterday at about noon but I didn’t get to the state command until about 8pm yesterday but to my greatest surprise the guy prostrated holding my legs that he only lied against me , that he was encouraged by a local contractor, he further claimed it was politically motivated which he further linked to the role I played in the emergence of HE Oyetola as the Governor of Osun. 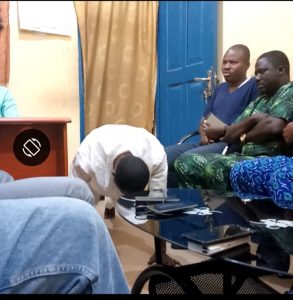 I have received calls from far and near that I should temper justice with mercy, that the guy should be freed . The question however is that where were these people when these guys were blackmailing me heavily? None of them called him to order !

I was greatly conspired against but God vindicated me , I give glory to him . The guy has frantically apologized with promise to issue a widely circulated disclaimer. I am NOT pressing further charges against him please.

I am already making serious efforts to get him freed . I was moved to tears yesterday night after I discovered none of those who encouraged Kazeem Aro to blackmail me show up to bail him. All his political associates abandoned him.

He was picked up around his political associates at about 12 noon and I was force to give him money to take his 1st meal when I got to the police command at about 8pm . They encouraged him to blackmail me, now they have abandoned him.

Vengeance is of the Lord. Kazeem Aro is fine!

Kazeem Aro Balogun, Everyday for The Thief, One Day for the Owner” – Yoruba Proverb