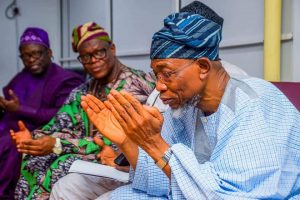 It is with gratitude to Almighty Allah that I welcome you formally to the unveiling of our Osun Central Senatorial Constituency Office. Today’s event is very significant because two of the cardinal pacts of my campaign in the run up to the election that brought me into office as a Senator of the Federal Republic of Nigeria are being fulfilled by this event. 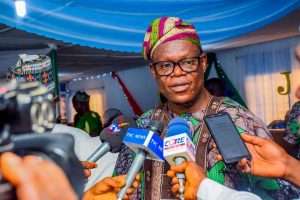 Today marks the official unveiling of theOsun Central Senatorial District Office and also the first Town Hall meeting where I shall give account of my stewardship at the Senate based on my first six months as your representative at the Senate.

As a Senator, with my primary place of work at the National Assembly, Abuja, I do not require a prophet to explain that without a corresponding office located within Osun Central, I will almost be completely cut off from my constituents on whose wings I am flying. In order to avoid any form of disconnect from my constituents, I deemed it honourable and necessary to set up aconstituency office where my constituents can easily reach me. It is my duty and it is thus incumbent on me to be accessible and available at all times to my constituents and assist in proffering solutions to their challenges the best way I can.

Therefore, this Constituency Office is an eloquent way of bringing the Senate closer to the people and this will assist in:

Also, we have engaged dedicated constituency staff (who are persons with considerable political experience) to address constituent concerns. The aim of this is to sustain the connection with the constituents on a professional level.

As a first timer in the Senate, I was appointed as the Chairman, Senate Committee on Diaspora, Non-Governmental Organisations and Civil Societies and also member of the following Committees:

The following Bills are also currently beingworked on and they will soon be processed for further legislative action;

I also laid a Petition titled “Petition on the abandonment of the Osogbo Steel Rolling Company and the Nigeria Machine Tools Limited and an appeal for a drastic and immediate action to be taken on their rehabilitation” signed by Engineer Maruf Bolarinwa and Elder Adewale Adewumi for the Egbe Osogbo Oroki Parapo and also on behalf of our constituents, the petition borders on the privatization of the Steel Rolling Mills and the Machine Tools in Osogbo which has foisted wanton waste and untold hardship on the people of the Osun Central Senatorial District.

At the home front, as part of my electioneering campaign promises, specified in the document I tagged as My Pact with the People of Osun Central, I also promised to pursue vigorously the issues of food security and the provision of portable water to make life easier for the people of Osun Central. I am happy to report back to you that within six months of my tenure, we have completed six bore holes out of which three have been commissioned and are already dispensing water for the respective communities where they are constructed. Further efforts are being put in place to achieve our promises and I want to assure you that we will not relent in any one of those promises.

In the quest to deepen democratic inclusion, especially among the youths, we are in the process of setting up a Youth and Students’Council to assist in political conscientization, engagement, education and mobilization of our youths as active players in our governance and democratic process.

While we await further legislative works on the Bills we have proposed and a favourable consideration of the Petition by the Senate, I wish to assure you of my avowed commitment to the cause of Osun Central.

Distinguished ladies and gentlemen, I must thank and appreciate the All Progressives Congress for the opportunity accorded to me to be the flagbearer of the Party in the last Senatorial election. My victory and those of all other candidates of the Party, including our victory at the last gubernatorial election,is a pointer to our unity, resilience and dedication to the cause of the Party. However, I must add that we should be wary of elements of divisive tendencies as contentious issues will not guarantee success for our Party at any election. We must learn to work as a team and forge in unity if we are to consolidate on the gains of democracy that our people deserve.

It is on this note that I recognise the contributions and efforts of our National Leader, Asiwaju Bola Ahmed Tinubu, Baba Bisi Akande and Ogbeni Rauf AdesojiAregbesola for their untiring efforts at building the Party.

On this note, I urge all Party faithfuls to rally in support of Governor Gboyega Oyetola so that we can have more meaningful development in the State of Osun.

I Thank you all and wish you a merry Christmas and a prosperous new year in advance.