Southwest: Buhari and lessons from Tinubu, Ambode by Shettima

Borno State Governor Kashim Shettima, who heads the All Progressives Congress (APC) reconciliation committee in the Southwest, has hailed party stalwart Asiwaju Bola Tinubu and Lagos State Governor Akinwunmi Ambode for their selflessness. He said Tinubu and Ambode were more interested in the party than in personal gains, urging others to emulate them. 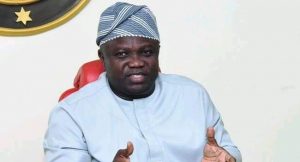 The deadline for both submission and substitution of party candidates has elapsed. So as I said to our other party members in previous hearings, some people may therefore wonder, of what use is the APC national peace and reconciliation committee for the Southwest?

Fellow party men and women from Ogun and Lagos, some, if not many of you are aggrieved with the outcome of the APC primaries. But as we know, party politics is sometimes unpredictable. However, we must summon the courage to fight our instincts by looking into the wider picture.

As I cited in Ekiti on Monday, if we are to go back to the formation of the APC, I think the first victim of the party’s negotiations and compromises is Asiwaju Bola Ahmed Tinubu. We all know what Asiwaju had put into the APC but when it was time to determine the running mate of President Muhammadu Buhari he had to painfully compromise his interest for overall interest of the party.

Again as I said in Ekiti and Ibadan yesterday, the Governor of Lagos, His Excellency, Akinwunmi Ambode who is our host and member of our committee, is for me, the natural winner of Nigeria’s politician of the year award. He has acted very un-Nigerian.

I will be right to say that from 1999 to date, I do not think any Nigerian politician has demonstrated his level of courage in the way he has handled the outcome of the governorship primaries in Lagos.

Ambode is a Governor who has worked very well in Lagos but as I said, politics sometimes comes with unpredictable outcomes. Our courage in reacting to situations like Governor Ambode has displayed, is what separates boys from men.

I think anyone of us who is unhappy with the outcome of the APC primaries should draw inspiration from Governor Ambode.

So, fellow APC members, we are here to make all of you recognize that each and everyone of you is very important to the APC. You can’t be disregarded as if your feelings do not matter.

If we are to go by Abraham Maslow’s hierarchy of human needs, majority of persons who aspire for public offices have gone beyond their basic needs of safety, food security and companionship . Yes, people aspire for public offices to serve their people but that aspiration comes with what falls under Maslow’s human need for recognition, self esteem and self actualization.

We are here not only here to respect your individual self esteem and console you but also to look into possible ways we can recommend for the party to placate aggrieved members through immediate windows or future opportunities.

Ladies and gentlemen, it is possible to take everything from a human being and get away with it. But one thing you should never attempt doing is to deny a human being his or her self esteem. We do recognize and respect that you are all men and women of honour. Men and women who, with dignity, have mass followers in your respective constituencies.

The dangerous thing any political party will do is to completely ignore any of you in the believe that you either do not matter or that you will always remain in the APC out of loyalty.

We are here to share your individual feelings. We are here to listen to you, console you and know how best to make recommendations to the party headquarters. There are rooms for a party in government to create opportunities through which members can serve their people.

I know this is not an academic hearing but I am former University lecturer, I had escape academics. Besides, of all our six geo-political zones in Nigeria, none is as educated as the southwest.

So, permit me to draw inspiration from a writer, who once said that “everyone of us can be smart but none of us is smarter than all of us”. Another writer said and I quote that “the difference between success and failure is a great team”.

Ladies and gentlemen, the implication of what these two writers are saying is that none of us can deliver APC alone at any level of the general election.

Nigeria currently has about one hundred and twenty thousand polling units and for a Presidential candidate of any party to succeed, he or she will have to depend on good team work from 120,000 polling agents of his party and these are people he mostly doesn’t know and may never know.

To work with these 120,000 polling agents, the president will have to rely on party executives at the state, LGs and wards (level).

The ward stakeholders will have to rely (on) polling agents and those in charge of clusters of polling units. Importantly also, all steps would require one form of mobilisation or the other.

Fellow party men and women, in politics, everyone is dependent on the other. No one is independent. To succeed in politics, there is no alternative to genuine unity and inclusiveness.

Let me also add that in politics, we do not necessarily have to be liked. It is not a must that everyone must like our beautiful, handsome or perhaps very ugly faces like mine. What we need are genuine commitment and readiness to deliver results. Politics requires pragmatism.

We must be able to dance to the changing beats. Yes, politics requires loyalty. But it equally demands tolerance and compromises. At all times, those of us who exert influence must never forget that none of us is God. Only God has absolute control of who gets power.

Let me share my own experience. Ahead of the APC primaries in Borno, there were some people I didn’t support but they won the primaries. If one is to argue that those people may have spent money on delegates, the truth is that they certainly can’t be richer than the collective.

The truth is that while I did not like them, they were more popular with delegates and they won the primaries. I accepted the outcome and I refused to make the slightest attempt of substituting any of those I didn’t support.

Fellow party men and women, one of the things we must never forget is that in politics, no one person gets his way all the time. Even a President doesn’t have his way sometimes. Politics requires tolerance and compromises.

I am very proud to say that regardless of whether anyone emerged with or without my support at the primaries, I am 100 percent in support of all APC candidates in Borno State and I will support every one of them. I will also count on their support.

After spending good time having frank conversations with Governor Ambode, I am more than confident that he is 100 percent in support of all APC candidates in Lagos, particularly His Excellency, Babajide Olusola Sanwo-Olu.

I will like to once again thank each and everyone here who are aggrieved for not leaving the APC. Our committee thank and commend you for keeping faith.

Perhaps, I should also tell that you have applied political wisdom by not leaving the APC.

Your Excellencies, ladies and gentlemen, from the ground realities of ongoing political permutations, President Muhammadu Buhari will insha’Allah win his reelection come February, 2019.

There is a Yoruba proverb that says Atete sun, ni Atete ji. If you sleep early, you will wake up early.

So, no one should deceive you with a fake analysis and prediction. Remain in APC and let’s solve our in-house problems, work for the APC, win the election and move Nigeria to the next level.

Shettima, Governor of Borno State addressed APC stake-holder and aggrieved members from Lagos and Ogun State at the opening of an interactive hearing in Lagos, organized by the party’s national peace and reconciliation committee for the Southwest, which the Governor