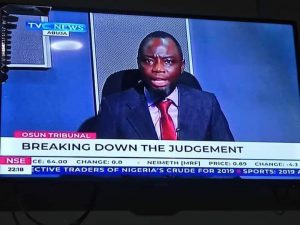 “In 17 polling units, election were cancelled and what was the reason given for the cancellation? The reason was that in form EC8As, there are top columns, which has column 1-8 where we have ballots paper accounting and space for entry the number of accredited voters. In those columns in the 17 polling units, the petitioner tendered form EC8As, the pink copies which they collected at the polling units and they alleged that those columns were not filled. When they came before the court, they were cross examined as per whether they were at the polling units from beginning of the election till the end and they give evidence to the effect that they were there. That accreditation was done, voting was actually carried out, sorting, counting, announcement of results and fill in of forms. The main reason for cancelling the results of these 17 polling units according to the tribunal judgement (Majority Judgment) with me here is that the column for ballots paper accounting on the form EC8As were not filled.
The second ground in relation to rerun: what majority decision found was that election actually took place in those 7 polling units and that when it got to state, the state Returning Officer cancelled it. Now, what the both party pleaded was that in the affected polling units in Orolu LG, election didn’t take place. In Osogbo the presiding officer absconded, they stated that there was no result at all but majority decision says that election actually took place and the state returning officer cancelled it and the state returning officer lacks the power to cancel an election that have been concluded in the polling units. They ultra vires his power in cancelling it and consequently they declared the inconclusive election as null and void. When you see the minority judgment, it states that; the fact before us says that election didn’t take place, so the issue of somebody cancelling it or somebody who has the power to cancel it didn’t arise.
The only reason why the election of 17 polling units were cancelled was that the topmost column of form EC8As were not filled. Now the chairman of the tribunal came up with a reason, he said: election in a unit is a process, it start from accreditation, voting, sorting, counting, announcement of result fill in of forms. He said all the witnesses who came before the court, they told the tribunal that they were in their various polling units from beginning to the end. That accreditation was done, voting was done, sorting was done, counting was done, they filled the forms, they countersigned. The chairman now said; if only out of about six steps, the only one that they are quarrelled with, is that the presiding officers failed to fill the column of ballots paper accounting; is that substantial enough? If it is substantial! The witnesses were asked: Did you have issue with your results? They said NO! They only quarrel with non fill in of the forms. How has that non fill in of the forms affected the results? The chairman now said; if that happened to be the only reason, it has never show any nexus between non fill in of that form affect and how it affect their results because they were asked: was the results announced? They said: YES. Was it the one in the form EC8As which you’re alleging? They said: YES! The results and scores are the same on both the CTCs and the pink copies they brought. The Chairman now said; that will not be substantial enough for an election to be cancelled.
What we are going to the court of appeal to determine now is WHETHER NON FILL IN OF COLUMN 1-8 ON FORM EC8As IS SUBSTANTIAL ENOUGH TO CANCEL AN ELECTION ESPECIALLY WHERE NO CORRUPT PRACTICES OR ANY OTHER ELECTORAL MALPRACTICES WERE NOT RECORDED.
On the issue of who is the Governor elect of Osun state:
It takes poor knowledge of law for my colleague here to say Ademola Adeleke is the governor elect of the state. By virtue of provision of section 143 sub section 1, the law says when such a thing happens that the election of an incumbent is being nullified; he has 21 days to appeal, it means the provision of the law has put that judgment in abeyance till after the 21 days. Whatever the tribunal says we have no meaning in the eye of the law until after the 21 days without appeal. With this provision, it make senator Adeleke NOT governor elect.
I want our people to know that the cancellation of election in those 17 polling unit was not because of any electoral malpractices, not for any corrupt practices, not for any other substantial non compliance but has a result of improper fill in of topmost column of for EC8As. The Chairman of the tribunal disagreed with his members that the ground is not substantial enough to cancel those polling units.
Our argument now is; non fill in of forms in the absence of any corrupt practicises cannot be substantial enough to nullify an election in those polling units. This is part of what the court of appeal will decide.

On the issue of inconclusive election: the tribunal not even the petitioner claimed that election were held in those 7 polling units but the petitioner agreed that election were not held. The Chairman of the tribunal says that; the facts before them shows that election did not take place. The issue of who has power to cancel or not does not arise because they claimed that the Returning Officer didn’t have power to cancel an election.
The issue the court of Appeal will decide will be WHETHER IN A SITUATION WHERE BOTH PARTIES AGREED THAT ELETION DID NOT TAKE PLACE! WHETHER THE ISSUE OF WHO ACTUALLY HAS POWER TO CANCEL IT ARISE AT ALL.
What are you cancelling? Can you cancel what is not in existence.