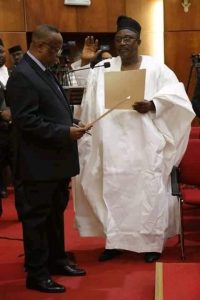 Adeyemi is replacing Senator Dino Melaye of the Peoples Democratic Party (PDP) who lost the rerun in the Kogi West senatorial election. The swearing-in was done by the Clerk of the Senate, Nelson Ayewoh, at the start of plenary.

Adeyemi is returning to the Senate about five years after he lost the seat to Melaye at the 2015 election.