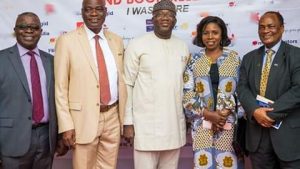 Ekiti State Governor, Dr. Kayode Fayemi has charged the Nigerian media to rise above its traditional role of news reportage and start promoting social justice, by holding government accountable for its policies and programmes.

Delivering a paper entitled Excellence in Governance: “Exploring a Synergy between Think-tanks and Mass Communicators” at the first Governors’ Lecture of the Department of Mass Communication, University of Lagos, Fayemi advised media to quit its adversarial tradition, become less antagonistic and start being highly critical in setting agenda for good governance.

The event, which also featured the public presentation of a new book “ Introduction to Philosophy of Mass Communication, was attended by journalists, teachers, students and public relations practitioners.

Fayemi called for a deliberate shift from market-driven sensationalism to development- driven reportage.

He noted that research has shown that consistent exposure to negative news brings apathy, hopelessness and cynicism among the populace.

He said: “Communication has a great role to play in promoting good governance. To play this role, the Nigerian media must rise above the traditional role of information, education and entertainment to promote social justice and hold government accountable. The media should set agenda for good governance and ensure discussion on issues of good governance.

Politics is too important to be left for charlatans and practitioners with shenanigans. The media should encourage more decent people to get involved in politics, as the penalty for refusing to participate in politics is that ‘you will be ruled by your inferiors.’

Earlier, the chairman of the occasion, Prof. Ralph Akinfeleye had said there could not be sustainable democracy without free press.

The Vice Chancellor of the university, Prof Oluwatoyin Ogundipe said the varsity was setting the pace by making the Department of Mass Communication one of the best.