Junaid Muhammad, elder statesman and Second Republic House of Representatives member in this interview with TEMIDAYO AKINSUYI, speaks on the dethronement of former Emir of Kano, Mallam Muhammad Sanusi by the Kano state government.  Excerpts:

There is this belief in some quarters that the dethronement of Mallam Muhammad Sanusi, former Emir of Kano by the Kano state government has political undertone. Do you also share that view?

No! It has no political undertone. I say no with great circumspection because the Emir is not a political appointee; he is an appointee of the traditional institution of the Emirates system.

This system predates partisan politics in Northern Nigeria. The British came and found the system, they retained the system after making some modifications so it could align itself with modernity and the system of British public administration. Also, they were not prepared to spend much money on administration in Nigeria when they had India, a much bigger country; which is today India, Bangladesh, Pakistan and Malay, the main component of Malaysia.

There are other countries which were supposed to be under the public administration system of the British. 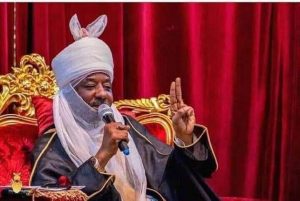 As far as I am concerned, that was the main rationale. When we got independence in 1960, we did not dissolve it. Those who are making noise in other parts of the country outside the North also retained their own system of government.

Where it did not exist in South East and South South, they somehow came round to electing something similar to what we have in the North for themselves. As far as I am concerned, it has nothing to do with politics.
What brought politics into the appointment of the last Emir who has just been dethroned was the fact that PDP decided to get involved and it also coincided with the fact that the former Emir had made reckless statements about missing $21billion and the former President, Goodluck Jonathan asked he be arrested.

However, he went into hiding and it was while he was in hiding, the vacancy occurred through the death of Emir Ado Bayero and he became the Emir of Kano. The then Governor, Rabiu Kwankwaso and his Deputy, Abdullahi Ganduje, who is the current Governor of the state, hid him in Government House and later they announced his appointment as Emir of Kano.

But since he became Emir, he decided to be openly partisan and he had problems with the previous Governor Kwankwaso who issued him a query.

That trend continued with the current Governor even though the two of them (Kwankwaso and Ganduje) are now in different political parties. Kwankwaso is now in PDP, while Ganduje who was then in PDP is now in APC.

What can you say about his appointment as Emir?

His appointment as Emir has been a very controversial appointment and it was done with great disrespect to the wishes of Kano people. I remember his grandfather who was one of the most autocratic, most corrupt and most vicious monarchs of the Fulani Emirs in Kano. He was appointed by the Sardauna of Sokoto and it was the same Sardauna who dethroned him.

I remember as I was growing up in the 1950s, thousands of Kano people were taken to the main prison in Kano and other prisons because they were demanding for the creation of Kano State. Many of them were killed because they were supporting Northern Elements Progressive Union (NEPU) and PRP’s Sawaba.

So, there is a history between the former Emir and his grandfather and the city of Kano. Clearly, this mischievous attempt by Lamido Sanusi to now identify himself with the radical wing of Kano population is uncalled for.

They are right-wing persons who have no respect for the common man and none of them can be associated with any progress in Kano today. The educational attainment of Kano today was done under the auspices of Audu Bako who was the first military administrator of Kano State who was in fact, a policeman and nobody can point out to you one single thing his grandfather or him did for the people when they were Emir of Kano.

If indeed, there was a political undertone, the fact of the matter was that his dethronement was the wish of the majority because there has not been any negative reaction from anybody since the action was taken. People are going about their normal businesses. I just returned from my bank which is located in the heart of the city and everywhere is peaceful.

There is also this belief that some of the statements made by the deposed Emir are controversial and offensive to the Northern elite.

What is your reaction to that?
First, I have a reputation for over 40 years of making controversial statements but people in this part of the country respect facts.

I have made several of such both as an active politician and now that I’m into retirement. However, the statements of the deposed Emir were utterly irresponsible and reckless and they were designed to insult the North.

In Sociology, we have a group of people who are called misanthropes, they are people who hate themselves and because they hate themselves, they project that hatred to people with whom they share the same identity.

The deposed emir is a classical misanthrope. If you go through the history of all societies, I know some errand boys of the Sokoto Caliphate who hate themselves and therefore hate the Sokoto Caliphate. He belongs to the band of Fulani clan called Sullubawa.

They are a quite a number of them who have had a very rough patch in life. You can’t exercise power if you don’t have support of the people.

Sanusi’s statements were not only controversial but the main reason was he chose to be in the service of those who have made it their professional career to abuse the North, humiliate the North and believe nothing good can come out of the North. No community can be condemned out rightly like that nor can you condemn the leaders of societies the way he has been doing it.

If you abuse Northern elite, fine but what about other elite in other parts of the country? Have they fared any better? The answer is no.

I condemn Nigerian elite wholeheartedly but I don’t believe that we should do so as to be pleasing to some people in the South. That is the difference between him and the rest of us who are radicals. We are true radicals who believe in what we say.

We believe the elite are irresponsible but the deposed Emir believes only Northern elite should be blamed. So, if he finds himself in the hot water of the Northern elite, he shouldn’t be surprised.

Is there still hope for him in coming back to the throne?

There is nothing the media in Lagos or anybody can do to bring him back to be Emir. I don’t believe any line of his family can be emirs again because we have tried them twice and they have been a woeful disaster.

He is out of touch of realities in Kano and the North and none of the people want to impose themselves on the North. They want to turn the North into a colony. If he is such a great guy, let them make him the President or let him stand for election, let’s see the votes he can get.

If you marry Hausa girl,you will enjoy 3...

History of the Most powerful woman in Yoruba...

King (Dr) Saheed Osupa is set to have...

Adabanija @50th: to Allah be the glory

Avoid any War with anybody who has nothing...