Popular Posts
The Story Of Attah Ameh Oboni – the...
The state of Osun Anthem,Yoruba and English.
The Biography of the Alaafin Oyo his imperial...
Breaking News: Again, Ladi Adebutu Loses To Jimi...
Opon Imon (Tablet of Knowledge)Read this carefully from...
Politics

If you know the law of Karma, you will understand the scenario better in today delivered tribunal’s judgement against Hon Bamidele Salam of PDP in favour of Oluomo Rt Hon Rafiu Adejare Bello of APC. 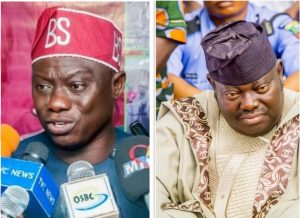 Exactly ten years ago 2009 to be precisely when Bamidele Salam was the sitting executive chairman of Egbedore local government,the PDP in connivance with some INEC staffs voided ballot papers in Ward 10 Olorunsogo to pave way for rerun election of house of assembly where Hon Abiodun Awolola was then member representing Egbedore state constituency under the defunct ACN and eventually they successfully manipulated their candidate Hon Okun Ibiremi in to replace Awolola.

Bamidele Salam as the executive chairman of Egbedore local government then participated fully in all the manipulations that saw ACN candidate out and brought in Hon Okun Obiremi.

What goes round must surely come around,the same Bamidele Salam is now at the receiving end of the unfavourable tribunal’s judgement and he will have to face similar scenario of 2009.

The law of Karma is real.

The rerun election is going to determine the real owner of Ede federal constituency seat between Bamidele Salam of PDP and Oluomo Rt Hon Rafiu Adejare Bello of APC,and it is going to be free and fair and credible just like that of 2009 that removed Hon Abiodun Awolola and Rt Hon chief Najeem Folasayo Salam.