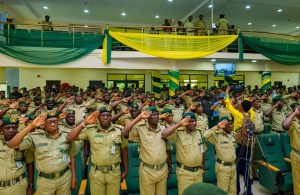 President Muhammadu Buhari has been unrelenting in the provision of security for Nigerians, and this is evidenced with the level of improvements in the operations and the facilities of security agencies in the country.

The Minister for Interior, Ogbeni Rauf Aregbesola made the observation Friday in Abuja during the second leg of the familiarisation visits to agencies under his Ministry, accompanied by the Permanent Secretary in the Ministry Barrister Georginia Ekeoma Ehuriah, MON.

The visits which started on Thursday, continued at the Headquarters of both the Nigerian Correctional Service, (formerly Nigeria Prison Service) and the Federal Fire Service. 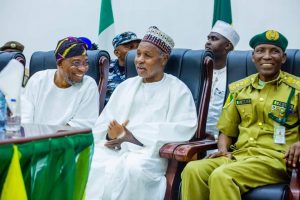 Addressing officials of the Service, led by the Controller General, Ja’afaru Ahmed, Ogbeni Aregbesola said President Muhammadu Buhari has recorded tremendous results security wise in the country. He identified the improved facilities and structures at the Nigeria Correctional Service Headquarters as one of the indices. 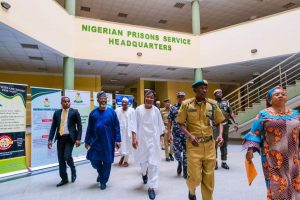 “If people will not see the humongous achievement of President Muhammadu Buhari so far, with what I see here today, entering this place, I think members of this agency are attestation to the efforts of Mr. President”

The Minister then charged the agency to see the importance of prevention of social deviations as one key component of their core mandate. He also tasked them to develop a system of operation not as punitive but as corrective measures, to reflect the new thinking of Mr. President. 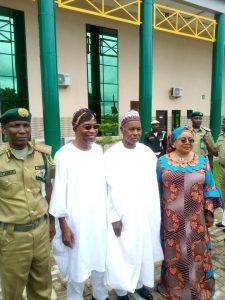 Reacting to a question posed by a reporter relating prison brake, the Minister said jail brake rarely occur in Nigeria, hence should not be addressed as a major challenge of the agency.

“The challenges of the Nigeria Correctional Service are the old and dilapidated correctional buildings, many of which were constructed several decades ago, and the non-correctional nature of the old prison service which were essentially custodian centres, the new Minister said. 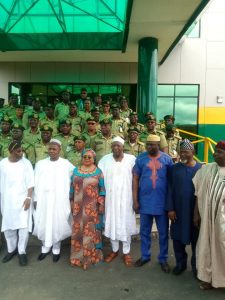 The new Minister also expressed concern with respect to youth radicalisation, charging the Service to develop synergy with relevant establishments to check the development.

Earlier in his address, the Comptroller General, Ja’afaru Ahmed, attested to the Minister’s assertion, adding that many prison structures were dilapidated until the intervention provided by the Buhari government some two years ago

“Of the over 200 prisons across the country, most of them were constructed over 100 years ago, thus the reason why most of them are dilapidated, until two years ago that attention was given to them. For example, Kuje prison had just two vehicle before this administration. Now they have seven.
Continuing, the CG said: “so, we have no doubt that under your able leadership as the Honourable Minister, and with your wealth of experience you are going to take the Nigeria Correctional Service to the next level”.

At the Federal Fire Service Headquarters, the Minister charged officers to key in to the new drive of the Ministry with respect to the SET slogan which captures the three major thrusts of the Buhari administration, including Security, Economy and Transparency or fight against corruption. He added that they have roles to play in the provision of safety for Nigerians.

“I understand you have challenges; the duty I have as the Minister, is to ensure that these challenges are tackled and l promise you I will do that”, the Minister asserted.

Aregbesola is a perfect fit for interior ministry; Biyi Odunlade.