Our attention has been drawn to an erroneous claim, false accusations and blatant lies being spread around by the campaign organisation of Senator Ademola Adeleke against the Distinguished personality of Senator Adelere Oriolowo as regards the flag-off, of Ejigbo-Iwo road reconstruction and rehabilitation that was held on Wednesday 8th of January, 2020. 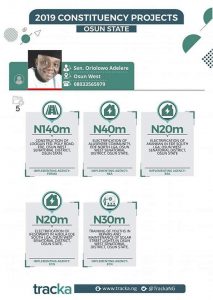 In the Press Release, it was erroneously claimed that Distinguished Senator Adelere Oriolowo lied on purpose as regards who facilitated the reconstruction and rehabilitation of the Ejigbo-Iwo road wherein, the Press Release falsely claimed, it was Senator Ademola Adeleke who was instrumental to how the dilapidated road got the attention of the relevant government agency that has culminated into how the Road has now started being reconstructed and rehabilitated.

We want to state categorically that the statement from Senator Ademola Adeleke campaign organisation is puerile, hogwash and blatant lies. 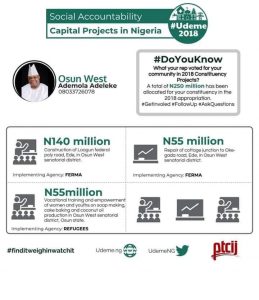 If the aforementioned imaginary money was released, what stop the implementation of the project since 2019 till Wednesday 8th of January, 2020 that Senator Adelere Oriolowo officially flagged off the project?

Sometimes last year, precisely on the 22nd of November, 2019, we released a Press statement concerning a misleading infographics from TrackaNG( a public accountability organisation) which shows that the 2019 Constituency projects meant for Osun-west Senatorial district was allegedly sponsored by Senator Adelere Oriolowo.

In the Infographics shown by TrackaNG, there was no mention of Ejigbo-Iwo road as one of the constituency projects facilitated by Senator Ademola Adeleke as his 2019 constituency projects while he was serving the Senatorial District at the Red Chamber, it is now so surprising that the Campaign Organisation of Senator Ademola Adeleke is laying claim to a project their principal has no involvement in how it was facilitated.

Below are the projects Senator Ademola Adeleke wish to facilitate as Constituency Projects in 2019. 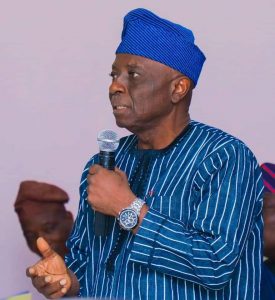 Is it now not laughable that such nepotic character is laying claim to a project he will never wish see the light of the day unless that of the community he comes from?

Acting up as a formidable opposition involves giving accurate data and information on government policies and projects, however on this issue, Demola Adeleke and his lieutenants goofed totally.

We are expressly looking forward to what Senator Ademola Adeleke reaction will be when the construction of OFFATEDO-EDE road facilitated by Distinguished Senator Adelere Oriolowo equally starts very soon.

On a quick note, we want to advise the campaign organisation of Senator Ademola Adeleke to note the correct spelling of Distinguished Senator ‘Adelere’ Oriolowo name as against ‘Olalere’ they wrongly call him. Kindly note this for future undertakings.

Conclusively, we want to advise Senator Ademola Adeleke, his followers and party members that they should stop spreading lies, falsehood and deceitful statements, electioneering time is over, this is time for NATION BUILDING.

We admonished them to kindly join hands with Senator Adeyemi Adelere Oriolowo to take Osun-west, Osun state and Nigeria to the NEXT LEVEL. 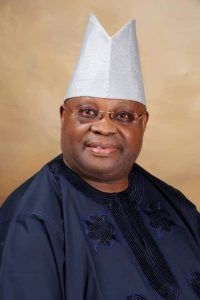 For us, it is a REPRESENTATION with absolute RESPONSIBILITY.

We wish you all the best. Thanks and God bless.