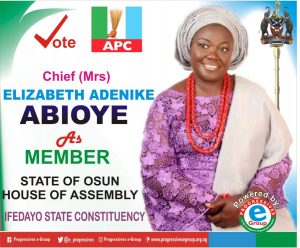 Here comes…. A Woman with the fear of God, A Virtuous woman, A responsible wife and mother, A Philanthropist, A Social Justice crusader, An Achiever, A Farmer, An Entrepreneur,

…I present to you Chief Mrs Elizabeth Adenike Abioye born on 7th January in the 60s to the family of Pa Alabi
Adefila (The Otun Ijo of St Stephens Anglican Church) of Atambati, Oke Balogun Compound Ora Igbomina in
Ifedayo Local Government Area of Osun State.
The Iya Ewe of St Stephens Anglican Church Adenike Abioye Atanmbati Dynasty of Oke
Balogun (ward7) Ora Igbomina .Her mother is from Odoogun Odomija compound(ward 9) while her Maternal
grandmother is from Ile Laro in Oke Kanga compound (ward 8) of and her paternal Grandmother was a
daughter of Obaala Ora in Iperin compound (ward 10) of Ora Igbomina
.She is happily married to Engr Abiodun Abioye of Oke Afin Compound of Ora Igbomina.
She had her primary Education at St Stephens Anglican primary school Ora in 1975 and Ora secondary
Commercial Grammar School Ora Igbomina between 1975-1980. She later proceed to Rimax Institute of
Secretariat Studies, Lagos between 1987-1992 and B.SC in Secretarial Administration Lagos State University
between 19972002.
The young Adenike worked briefly with Osun State Broadcasting Corporation between 1987-1992. She later
joined Wetland Construction Nig. Ltd in 1992 as a Secretary where she rose to the level of a Director and Chief
Operating Officer.
She has employed more than 70 indigents of Ifedayo in her company among which we have the company
Accountant and the Human Resources Manager, Project Managers etc.

She has helped and still helping hundreds of indigent students to complete their education in various tertiary
institutions across the country through her annual scholarship and Bursary award scheme which has being
running more than two decades now and still running.
In her bid to rescue then dilapidated educational system in Ifedayo and its environs, She has employed numbers
of quality Teachers to the secondary schools in Ifedayo local government as well as influencing the posting of
NYSC Corp members with Science oriented courses and paid them monthly as incentives to stay.
Chief Mrs Adenike Abioye has passion to help others and some of her philanthropic works include:
Yearly Award of scholarship to the indigent students since 1995 till date
Employment of Teachers into Secondary schools at Ila and Ifedayo Local Governments to support the Educational Development of the Area till date
Invaluable financial supports to different groups and associations including the NYSC posted to Ifedayo.
She donates Diabetes Drugs to members of People Living with diabetes in the state of Osun till date
She also donated over 100 GLUCOMETERS (Blood Sugar Monitoring Machine)for Diabetes self management
Clearing and Grading of Rural Roads across all the Less cities in Ifedayo
By the grace of God and the will of the people, she will be representing Ifedayo state constituency in the State
of Osun House of Assembly. She is Trustworthy and has the capacity to give us quality representation.
Vote for good governance Vote Adenike Abioye

The Biography of Hon John Ibirogba Babatunde a.k.a Eleniyan, the APC house of assembly candidate in Egbedore local government area in the state of Osun.