OYEWESO COMMISERATES WITH TIMI, EDE MAPO AROGUN OVER THE DEATH OF CHIEF BABALOLA 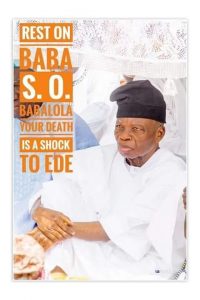 As the people of Ede, Osun State and Nigeria are morning the death of Vice President, Nigeria Supreme Council of Islamic Affairs, Chief Saka Olayiwola Babalola, the Director, Center for Black Culture and International Understanding, Professor Siyan Oyeweso has described the deceased as a selfless and disciplined individual whose legacies will remain indelible for several years.
In a statement he personally signed on Wednesday and obtained by Insight Media, Oyeweso commiserates with the family of Chief Babalola, the Timi of Ede, Oba Munirudeen Adesola Lawal, Laminisa 1, the people of Ede, Osun state, the Islamic world and Nigerians at large over the passage of the Iiconic community and religious leader”.
The statement reads, “The death of Chief Saka Olayiwola Babalola, the Saraki Adinni of Lagos remains colossal loss and it happened when the sagacity and experience of the deceased was needed most by old and young.
” Chief Babalola was a self made man. He was a selfless individual who rose from grass to grace through discipline, hardwork, and the grace of God. Born to a humble family of Late Papa Raji Babalola, a quintessential co-operative giant. He had a fairly rough educational start in life, but with determination, he rose to become a genius and a man of immense value to humanity in various endeavors.
“Late Chief Saka Olayiwola, who left Ede in the early 1950s in search of the Golden Fleece, he arrived Lagos and became a Pools Clerk under the defunct NIGERPOOLS. After a short stint at NIGERPOOLS, he tried his hands in petty trading; displaying wares all over the streets of Lagos, thus justifying the sayings that uneasy lays the “head that wears the crown”
“With Late Chief Babalola’s grim determination for success, he moved over to Apapa Port and started forwarding and clearing business. From there, fortune smiled on him as he was granted the franchise of Peugeot Car products by Peugeot Automobile of France. From this point on, there was no looking back, as the greatly religious S.O.B relied on God for business openings. Chief S.O.B got involved in telecommunication business as one of its few pioneers, with the establishment of TELEMOBILE (NIG) LTD, offering specialized service to the Nigeria Police Force
Chief S.O. Babalola was a philanthropist in his life time. S.O.B gave out scholarship awards to indigent students all over Nigeria, capping it all with the construction and donation of SAKA OLAYIWOLA BABALOLA AUDITORIUM to the Federal Polytechnic, Ede, where he was an Honorary Fellow. Chief S.O. Babalola also donated the Senate and Administrative Buildinf of Fountain University, Osogbo. The University of Calabar awarded Chief S.O Babaloa with Honorary Doctoral Degree of Business Administration (Honorius Causa). Chief S.O. Babalola was Muslim Ummah of South West Nigeria (MUSWEN) President and the Deputy President General, Nigerian Supreme Council for Islamic Affairs (NSCIA) (South) in his life time. Chief S.O. Babalola in his life time was a foremost Nigerian Patriot, Nationalist, De-tribalized Leader and a bridge between the North and the South.
” May I join the teaming Nigerians to commiserate with the Babalola’s family, the people of Ede, the NSCIS under the leadership of the Sultan of Sokoto, Alh Sa’ad Abubakar, the people of Osun state and Nigeria in general over the loss of the the iconic community and religious leader.
Chief S.O Babalola was survived by many children and grandchildren among whom are Dr Ridwan Lanre Babalola, a former Minister of Power of the Federal Republic of Nigeria and Hon Idiat Oluyemisi-Babalola, the immediate past Commissioner for Federal Matters and presently a Commissioner designate, State of Osun.
Oyeweso prayed to Almighty Allah to grant the the deceased Aljanat Firdous and give the family fortitude to bear the loss.