Popular Posts
North-West, South-West lead as INEC registers 96.2 million
BREAST SUCKING; IS BENEFICIAL FOR ADULTS.
Many wives and Children of Chief Olusegun Obasanjo...
June 12: A milestone for Democracy By Asiwaju...
Suspect in FUOYE’s student death handed over to...
Gists 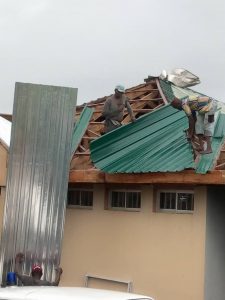 He made this known during his assessment visit to the  Osun Staff  Clinic site alongside the  state Chairman of TUC, Comrade Adekola Adebowale and the State Supervisor of Works & Transport Engr  Remi Omowaiye over the weekend. The union leader was full of appreciation for the state Governor’s decision to rehabilitate and facelift the staffs’ clinic which was  in shambles before the Governor’s intervention.

According to Mr Adekomi the Governor has once again demonstrated his love and commitment to the welfare of the Osun workers. He then urged the Governor of the state to do more for the workers of the state.

He also admonish the Governor to fulfil his promises of the payment of Salary arrears and the monetization of the last promotion exercise which the Governor was an architect of.