Oyetola Waging War Against Me Since He Assumed Office -Aregbesola.

Oyetola Waging War Against Me Since He Assumed Office -Aregbesola.

Aregbesola further explained that he even begged Gov. Oyetola for complete two years for offence he never committed. 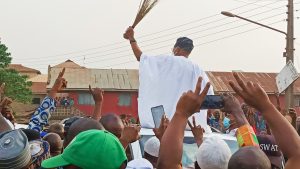 He made these known while addressing his supporters and loyalists in Ikire, Irewole local Government Area of Osun.

He said: “Since Oyetola assumed office, he has waged war against me like I once harm him. He claimed that I do not want him to emerge as governor, I told him that I heard him and now he is the governor, what else is the problem.

“I begged him for two years, I told him that people must not mock us. I told him that he is heading towards destruction. I served this state with the whole of my heart, I also served Oyetola so that he can succeed me in office. 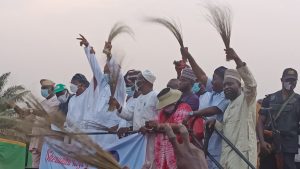 “When we came to this town for his campaign, we were drenched in rain from Akire’s palace to this place. He gets to that office, he claimed I am his enemy. Those who contested against him during our party primary, he pulled them closer while he fights me.

“I begged him for two years, I sent people to help me begged that, he should not love me but he must not fight me, even if you want to fight me, don’t abuse me and destroy my legacies.

“All that I told and warned him not to do, was what he did. He oppose what I did, all the things I did together with him for eight years, he opposed and reverse.

“He thought he can destroy me through my work, nobody was pushing him, he is pushing himself. He deliberately toe that path. He wagged war against me. He refused to listen to my pleas until he get rid of me. 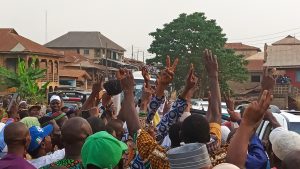 “When I observed that he would not listen I called people together that they should start telling people that progressives family must not be destroyed.

“We are the ones that bear the flag of this party, we fought for it since 2004. The owner can not stand while his possession is destroyed. Those people who don’t know how we build the party, are unpredictable.

“The party chairman, Famodun, we took him from PDP he may return to that party, we must not let him lead us astray.

“The leaders of the party now agreed that we should go back to where we miss the road in 2018. We realise our mistake that the person we ought to put in front, we neglected him, we followed a numbskull, ingrate and a wicked soul.

“When Adeoti was angry with us, he did not abuse us. when we refuse to do his will, he protested but he never cursed us. We have realised our misdeed to him, that is why we gave him the ticket of our caucus.

“Our hope is in God and the good people of Osun State. Nobody can overcome God.

“It is not a sin to contest for a position in a democratic government.

“The constitution of the party stipulates that after four years, we can change our candidate, but if he abides by the tenet of the party, we will support him for another term but if we see that he is doing things against the interest of the party, it the duty of the leaders and party members to vote against such person at the primary.

“With joy in my heart, I present to you Adeoti. Please vote for him on Saturday”

Speaking, the former SSG, Moshood Adeoti promised not to betray the people of the state

Between Aregbesola and Oyetola..