Oyetola to Ooni @ 46: You are a frontier for peace, unity.

Oyetola to Ooni @ 46: You are a frontier for peace, unity

Governor of the State of Osun, Mr. Adegboyega Oyetola, has described the Ooni of Ife, HRM Oba Adeyeye Enitan Ogunwusi Ojaja II, as a frontier for peace, unity and development in the country.

Oyetola made this known through a press statement signed by his Chief Press Secretary, Ismail Omipidan.

The Governor, in his congratulatory message to the Ooni on the occasion of his 46th birthday anniversary on Saturday, extolled the virtues of Oba Adewusi whom he said preached and practised peaceful coexistence among all ethnic groups in the country.

He noted that since his ascension to the throne, the Ooni has added great value to the traditional institution. 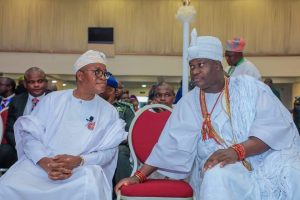 Oyetola also lauded the monarch for his immense contributions to the socioeconomic development of the State and the country at large, saying that the Ooni has remained a great advocate of good governance, peaceful coexistence and leadership to all both at home and abroad.

“On behalf of my family, people and government of the State of Osun, I felicitate the Ooni of Ife, HRM Oba Adeyeye Enitan Ogunwusi, on the occasion of his 46th anniversary.

“I thank the Almighty God for granting you yet another opportunity to celebrate this day in good health and peace of mind in service to Him and humanity at large.

“Since your ascension to the throne, you have added great value to the traditional institution. Also, as a custodian of tradition, you have been a great advocate both home and abroad.

“On behalf of the government and people of the State, I also appreciate you for your immense contributions to the socioeconomic development of the State. You have in no small measure, demonstrated your role as a father to all of us and we say thank you.

“It is our prayer that God will bestow upon you more wisdom and long life in good health on the throne of your ancestors in the discharge of your duty and in service to humanity”, Oyetola said.