OYETOLA RESTATE COMMITMENT TO SECURITY OF LIVES AND PROPERTY.

OYETOLA RESTATE COMMITMENT TO SECURITY OF LIVES AND PROPERTY. 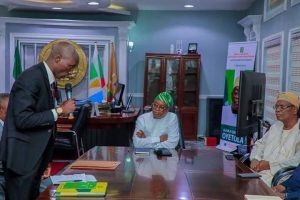 Governor, State of Osun, Mr. Adegboyega Oyetola has restated the commitment of his administration to the security of lives and property in the Land of Virtue in line with his promise to the good people of Osun while seeking for their support.

The Governor stated this on Monday while playing host to the top echelon of the National Youth Service Corps (NYSC), State of Osun, led by the State Coordinator, Osun NYSC, Mr. Ayodele Adewale Adegoke at his office in Osogbo, the state capital. 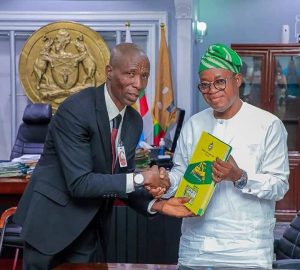 Governor Oyetola who told the delegation that crime rate in the State of Osun is extremely low as a result of the fact that the western state is consistently the most peaceful in the country, maintained that his administration is not resting on its oars at ensuring that the record is sustained through various pragmatic steps such as the ongoing construction of an helipad for the purpose of constant aerial surveillance, the collaboration of Southwest Governors to have a joint security outfit, with each state donating 200 patrol vans to assist the forest guards, all in a bid to rid the region of all manners of crime and criminality, among other well thought out initiatives. 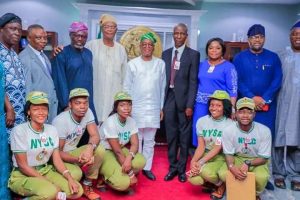 Mr. Oyetola stated that NYSC scheme has served the desired purpose for which it was established which he stressed is “unity”, adding that his NYSC experience was a memorable one.

” I did my NYSC in Borno State, when the present Yobe was still part of the northeastern state, precisely at Potiskum and it was quite memorable “.

“As a government, we have always been very supportive of the NYSC Scheme, whatever way we can still be of assistance, we will not hesitate to do so”.

The State Helmsman enjoined corps members deployed to the state for the mandatory one year service to their father land to eschew laziness and embrace diligence, urging them to avail themselves of the various tourist attractions in the state, citing the just concluded Osun Osogbo Festival which he said is an annual cultural celebration which draw adherents, scholars and tourists from different countries across the globe to Osogbo, the state capital. 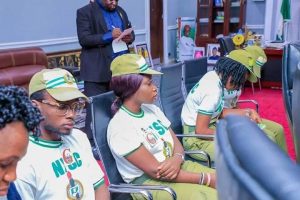 Earlier in his remarks, the State Coordinator, Osun NYSC, Mr. Ayodele Adewale Adegoke congratulated the Governor on the recent Supreme Court landmark judgement revalidating his deserving victory at the last September 2018 Gubernatorial Election, praying for the State of Osun to witness monumental strides during his tenure.

Mr. Adegoke told the Governor that NYSC Headquarters in Abuja, the Federal Capital Territory recently got Federal Government’s approval to establish Area Offices across the country, adding that the Area Office that will be overseeing NYSC Offices in the six southwestern states comprising of Osun, Oyo, Ogun, Ondo, Ekiti and Lagos states will be headquartered in the State of Osun where he said the flag off for the commencement of operations of the office to be done by the Director General, NYSC, Brigadier General Shuaib Ibrahim is likely to take place.

My relationship with your ministry is distant – Ogbeni Rauf Aregbesola,the honorable minister of interior.