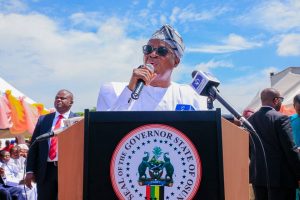 The Osun State Governor, Adegboyega Oyetola, has admonished the newly- inaugurated members of the cabinet to shun acts capable of undermining the corporate integrity of the administration and the state. 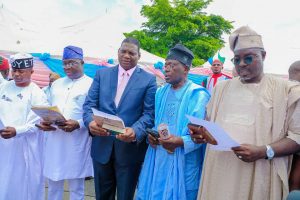 Governor Oyetola said the administration has zero tolerance for corruption and opacity, warning that the government would not hesitate to wield the big stick where necessary on any official found wanting of public misconduct. 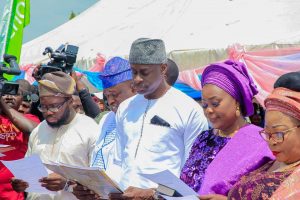 The governor warned the new Commissioners and Special Advisers to do away with frivolities and work as one formidable and impenetrable team, bound together by the sole aim of delivering on the Developmental Agenda of the administration. 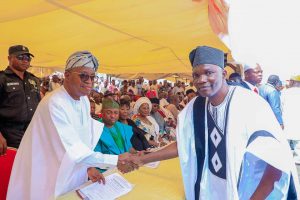 He called on them to see their appointments as clarion call to serve humanity and support the administration to uplift the state. 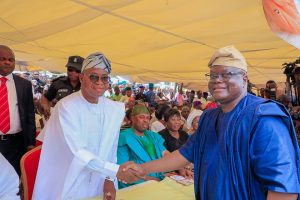 “Our Administration is a product of God’s Promise, the benevolence of the people and our Mandate.

The Almighty God and the people have delivered their own part. The ball is now in our court to deliver on our promise. As heads of Ministries, you are our delivery channel. I charge you to harness the available human and material resources to fulfil our bond to the people. 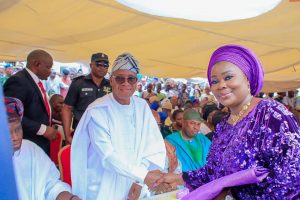 “This administration has zero tolerance for corruption and opacity. We shall therefore not hesitate to wield the big stick where necessary.

“Ensure that you discharge every duty with utmost probity, accountability and transparency as these are the elements that will deliver stellar service in the face of extant limited resources and earn the trust of the people. 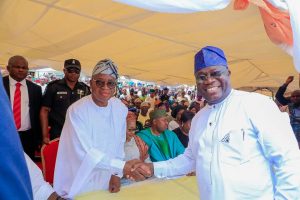 “As I indicated during the very intensive four-day retreat held last week, ours is an administration fully aware of the strategic role providence has thrusted upon us.

“We are aware of the onerous duty to build a truly-diversified economy that creates wealth and makes opportunities available for all classes of our fellow citizens,” the governor added. 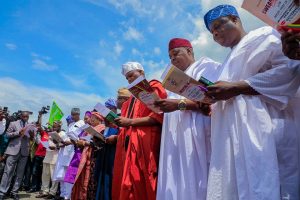 He also said cabinet members will be assessed from time to time for optimum performance.

The governor further said “Knowing that you do not have the luxury of time to spend on the learning curve, I charge you to quickly familiarise yourselves with the content of our Administration’s Development Agenda. You must realise that this is a task that must be accomplished. Similar to the Ada Declaration you pledged to uphold, a Performance Charter will be handed over to you today to guide your role in delivering on the Agenda. There will be a Service Delivery and Performance Evaluation Unit to assess your performance and productivity from time to time.” 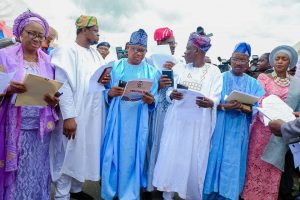 Speaking on behalf of the newly-inaugurated cabinet members, the Commissioner for Information and Civic Orientation, Mrs. Funke Egbemode, lauded the governor for the confidence reposed in them to serve the state.

She assured the governor and the entire people of the state of diligent service in their respective ministries.

“We will not disappoint you. We will put in our very best to support the administration and uplift the standard of living of the people of the state. 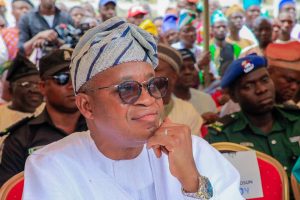 “We shall take to the lessons garnered at the retreat to effect positive change across sectors” she added.

Also speaking, the newly- inaugurated Deputy Chief of Staff in-charge of General Administration, Barrister Mikhail Adejare Adebisi, implored all members of the cabinet to see their appointments as a privilege to impact meaningfully on the lives of the people of the state.

Osun new cabinet and their portfolios.