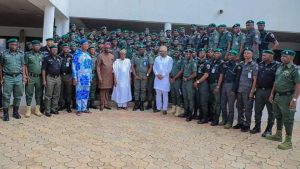 Osun State Governor, Adegboyega Oyetola, has lauded the Nigeria Police Force for the commitment of its men in securing the lives and property of the citizens of the state.

He was also full of praises for them for championing the virtues of professionalism, discipline and morality in the discharge of their constitutional responsibility.

The governor spoke at the State House in Osogbo, on Friday while receiving the participants at the just concluded 2 I/C Squadron Commanders course, held in Ila Orangun, in the State of Osun

He equally lauded the leadership of the Nigeria Police Force for championing the virtues of professionalism, discipline and morality in the discharge of their constitutional responsibility.

While commending the Force for instilling in its officers and men, the fundamental objectives of the institution as reflected in the inward and outward conducts of the personnel deployed to the state, the governor, who described security and welfare of the people as the fundamental objectives of government, applauded the diligent role being played by the security agencies particularly the police in keeping the country safe.

He pledged to continue to champion the security of lives and property of the citizens, saying no efforts would be spared to maintain the tempo of peaceful coexistence and harmonious relationship existing in the state.

“As the Chief Security Officer of the state, I must not fail to recognise the role being played by the security agencies particularly the police to ensure that our state is not only safe and secure but maintains its status as the most peaceful and safest state in the country.

“So, I commend the leadership of the Nigeria Police Force for extending the training to officers and men serving in the state, this is a demonstration to the fact that our state has been blessed with high level of disciplined and diligent police personnel.

“Of course, l am the Chief Security Officer of the state but it has taken your commitment and support for me to succeed in the efforts to secure the lives and property of the citizens. Our government will continue to support you on this task of keeping the state safe and peaceful.

“I appreciate the Commandant for leading the participants to honour me with this courtesy call. I will look at your extension of the hand of training for my officers and see how we can support in this regard. I thank you and look forward for more visits,” Oyetola said.

Earlier in his remarks, the Commandant of the Police Mobile Force Training College, Ila Orangun, Assistant Police Commissioner, Mr. Ikioye Orutugu, thanked the governor for finding it expedient to receive him and the 68 other participants whom he said were drawn from different parts of the country.

He also disclosed that the participants in the course of the training rubbed minds on the peculiar security situation in the State of Osun and came up with a position paper to be presented to the governor.

“The IGP has ensured that training and retraining is given its place of relevance. We have come here as your tenants drawn from all formations of the country. And we know that Osun State has been playing a key role in supporting the police force and training of the officers since 2006 when the Mobile Police College was established. In the course of training, we exchanged ideas on the peculiar security challenge in the State and the country and came up with a position paper,” the police boss said.

The Wall of Bourdillon too Strong By Jimoh Muwwaliu Alawo.