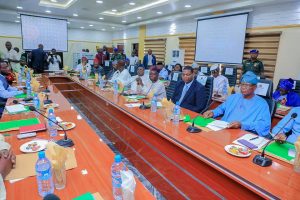 Osun State Governor, Adegboyega Oyetola, on Monday presented the Performance Charter to the newly-inaugurated members of the State Executive Council as a tool to measure and justify their performances in their various ministries. 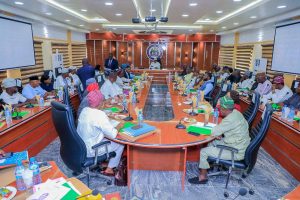 He said the Performance Charter has been carefully drafted to provide the clear-cut space and platform for all cabinet members to deliver on their valued contributions to the time-constrained work before them.

Oyetola spoke shortly after the new cabinet members took the Oath of Secrecy and thereafter signed the Performance Mandate at the EXCO Chamber, Office of the Governor, Osogbo. 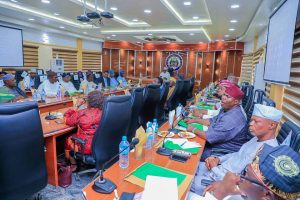 He called on the cabinet members to discharge their commitments in a most efficient and prudent manner that would help the state to actualise her dreams of becoming the pacesetter in all sectors of the economy.

“Again, we must note that we can only go so far to deliver on our vision, if only we work and walk together as a team and an indivisible force. 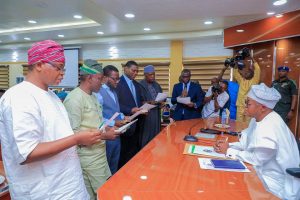 “We must at all times avoid the temptation to work in silos and put up a one-man show that can prove manifestly inimical to our goal of cohesive team-building.

“Importantly too, we must seek to make actionable the deliberations and conclusions reached during our cabinet meetings, and institutionalise them.

“A sure way of achieving this, especially in line with the spirit of the Ada Declaration, is to sustain and deepen the tempo of relationship between us and our hardworking bureaucrats, and also ensure debriefing sessions are constantly held with all MDAs.

“We cannot afford to walk alone without the assuring partnership of the state bureaucracy”, the governor said.

Describing the cabinet meeting as a valuable instrument towards the actualisation of the state’s set objectives, the governor called on the new cabinet members to see the weekly EXCO meeting as an important platform to generate, exchange valuable ideas and brainstorm on the best ways of implementing the government’s Developmental Agenda for the good people of the state.

“As I have noted repeatedly since your appointment, failure is never an option to be contemplated. As for me, I feel very hopeful and excited, knowing the calibre of the human capital and goodwill available in this council, as represented by you all – who, without doubt, are among our state’s most distinguished, experienced and accomplished citizens.

“Certainly, ours is a great team, immensely endowed with all it takes to put our state on the pedestal of assured and irreversible economic prosperity, ” Oyetola added.

Briefing reporters shortly after the meeting, the Commissioner for Information and Civic Orientation, Mrs. Funke Egbemode, said the council deliberated on the need for every member to work towards the actualisation of the state’s Developmental Agenda, by keying into the four pillars of the State Economic Plans.

The pillars are: economic and human capital development, security, infrastructure and environmental sustainability.

She added that the council also deliberated on the forthcoming Osun Economic and Investment Summit, which has been scheduled to hold from November 19th and 21st this year.

DONT GIVE ANY LOOPHOLE TO THE OPPOSITION”. Lani Baderinwa charged Progressives e-Group.