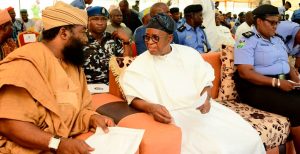 Osun State Governor Adegboyega Oyetola has praised the Nigerian Army for its decision to be part of the patrol team set up by the state government to protect life and property.

According to a statement by his Chief Press Secretary, Ismail Omipidan, the governor spoke in Osogbo on Wednesday when the new General Officer Commanding, 2 Division of the Nigerian Army, Ibadan, Maj Gen Anthony Omozoje, paid him a visit.

Oyetola, who congratulated Omozoje on his appointment, urged the military chief to strengthen the relationship between his office and the state government.

He said, “I must recognise the warmth reception given to me by the Chief of Army Staff, General Tukur Buratai, when I visited him in Abuja recently. There is no doubt in the fact that our state benefited sufficiently from the support given by the military before, during and after the last governorship election in the state.

“Without the efforts of the military, we won’t be able to curtail some criminal activities, especially kidnapping in the state.

“So, I commend the military for ensuring peace, security and stability in Nigeria.”

The GOC assured the governor that the army would collaborate with other security agencies to tackle the security challenges facing the state.

INTER-STATE PEACE CONFAB, 2019 ORGANISED BY WORLD INSTITUTE FOR PEACE IN PARTBERSHIP WITH PALACE OF ARAGBIJI WAS A SUCCESSFUL ONE WITH TANGIBLE COMMUNIQUE. Osun Version.