Popular Posts
The state of Osun Anthem,Yoruba and English.
The Story Of Attah Ameh Oboni – the...
Opon Imon (Tablet of Knowledge)Read this carefully from...
The Biography of the Alaafin Oyo his imperial...
Breaking News: Again, Ladi Adebutu Loses To Jimi...
Gists 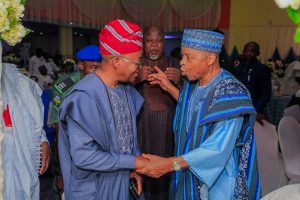 Oyetola, in his welcome address at a grand birthday event held at the International Conference Centre, University of Ibadan, Oyo State,  also described the elderstatesman as a democracy icon who is being celebrated across the globe. 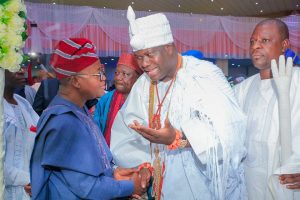 The governor went down memory lane to recall the pivotal role played by the celebrant in the tough struggle to restore democracy and the dignity of Nigeria as a nation.

He said, “I am highly honoured to welcome you all to the celebration of Lt. General Alani Ipoola Akinrinade (rtd.), CFR, GCON, a soldier’s soldier, a democracy icon, a patriot, a proud father and family man, and a statesman at 80. “One of the proofs of God’s blessings to a man is for his children to gather, celebrate him and declare him blessed in his lifetime. Our General, today’s gathering by us, your children – biological, political and military – testifies to God’s goodness to you and our appreciation of your life of kindness, service, humility and selflessness. “An entry into the Octogenarian Class is a privilege and it is doubly so if such a life is still a rallying point for national and international engagements. The composition of this audience testifies to the enduring relevance of a man born in the ancient village of Yakoyo 80 years ago, but now celebrated across the world.

“Communicators aver that any activity, no matter how profound, which is not given adequate publicity, is like winking in the dark, only the winker knows what he is doing, nobody else does. 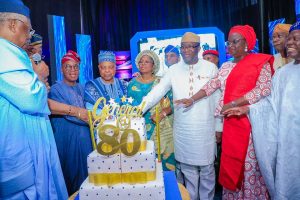 “It is on this premise that I deeply appreciate you all our distinguished guests and the Planning Committee for being the amplifiers of the humble contributions of this thoroughly patriotic Nigerian.

“Distinguished ladies and gentlemen, we are gathered here today to celebrate a gentleman whose destiny is intricately linked to the destiny of our country, Nigeria.

“He joined the Nigerian Army at the nation’s independence in 1960 at a young age of 21, rising through the ranks to become a Lieutenant General, the peak of his career, in the landmark year of 1979 when the military voluntarily handed over power to a civilian administration. “He continues to render selfless service to the nation after a distinguished career and in retirement. He was a light and a pillar during the dark days of the military when his own primary constituency, the military, annulled the 1993 Presidential Election and supplanted the will of the people.

“At personal costs, Lt. General Akinrinade aligned with the National Democratic Coalition, NADECO, to restore democracy and the dignity of the Nigerian nation.”

Oyetola also described Lt. General Akinrinade as an Encyclopaedia of Nigerian politics, having actively participated in the nation’s political evolution through the military days to the present democratic dispensation. 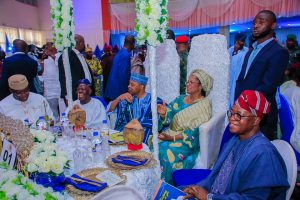 “Akinrinade’s credential as one of the selling points of The State of Osun. His profile and contributions are important chapters in the recognition of Osun as one of the States of Distinction in Nigeria.

“I am proud to be the governor of a man who typifies the Omoluabi ethos, which our state holds dear, and a fine gentleman who is a reference point in the military, statesmanship and progressivism,” the governor added.