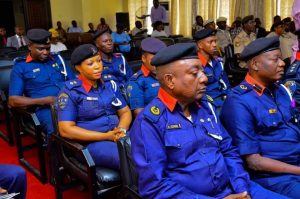 Governor Gboyega Oyetola of the state of Osun has charged security agencies to be more proactive in discharging their duties.

Governor Gboyega Oyetola gave the charge while receiving the bodies of the Nigerian Immigration Service (NIS) and Nigeria Security and Civil Defence Corps (NSCDC) in his office.

The Governor described the two agencies as very important in maintaining security and critical assets and also protection of lives and properties.

Governor Oyetola disclosed that the influx of the illegal miners across the country are worrisome, thus, making rooms for criminals. He therefore urged the security agencies to be alive to their responsibilities by flushing out criminals parading themselves as Miners. 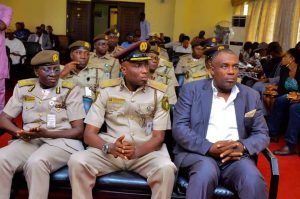 “We’re already working on the registration of the Miners but we need your help in the area of foreign criminals parading selves as Miners”.

“I also want you to work tirelessly in the area of Cultism by curbing it’s rampant among the School ages”.

“We’re also working on having joint patrols which will include all security agencies. We need your collaboration and cooperation to fish out criminals who come under the pretence of Mining”. 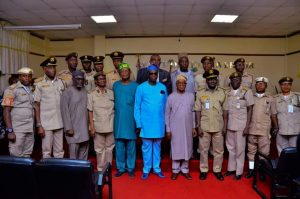 The Governor assured the agencies that their requests will be taking care of as soon as there’s increase in the Internal Generated Revenue of the state.

In their separate remarks, the duo of the State Controller, Nigerian Immigration Service (NIS) Commandant Issa Uba Panshekara and Nigeria Security and Civil Defence Corps (NSCDC) Commandant Oguntuase Adeyinka Kingsley who has just been transferred to the state and on familiarization visit to Governor Gboyega Oyetola congratulated him over his victory from the Tribunal.

They noted that the success of security agencies depends on the citizens of the state. They solicited for Citizens’ cooperation their agencies to achieve a common goal of a safe environment by fishing out criminals in their various abodes.

The security Heads also promised to discharge their duties with sincerity to make Osun a safe state.