.Says Osun youths are making waves in sports, games at home and abroad 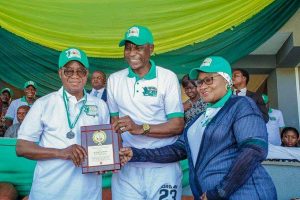 The honour, the organisers say, is in recognition of the governor’s tremendous achievements in the area of youths and sports development in the state.

Oyetola was also lauded by the leadership of the African Youths Sports Federation for implementing policies and programmes targeted at securing a better and rewarding future for the youths in the state.

The award was presented to the governor at the Annual Nigeria’s President National Under-20 Male Youth Football Tournament tagged “Osun AYSOF 2019”, organised in commemoration of the 1st Year Anniversary of the Oyetola’s administration, at Osogbo Sports Stadium. 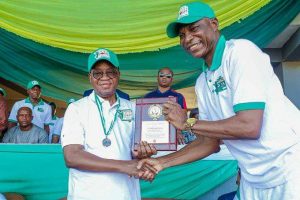 President, African Youths Sports Federation, Dr. Ahmed Lawal, said Governor Oyetola was selected for the award in recognition of his unprecedented achievement in youths and sports development in the state.

Lawal who presented the award to the governor on behalf of the leadership of the organisation, described the choice of Oyetola as a “round peg in a round hole”.

He described Oyetola as an “unrepentant lover of youths and sports”, saying the organisation deemed it fit to honour him with the award in order to appreciate him and inspire and encourage others.

He said: “As a matter of fact, Oyetola has been very supportive, we have been monitoring his activities in the area of youths and sports, and he has been doing excellently well.

“Even when he was in the private sector, his contribution was exceptional and he has been contributing in one way or the other to the development of sports at the grassroots.

“It is in the light of this that we approached him and he gave his consent to sponsor our championship, that is, the Annual Nigeria’s President Under 20 Championship.

“With these laudable achievements and support to the needs of the people particularly the youths, we have decided to honour him with this award as the Nigeria Best Sports Governor of the Year.

“As to the final holding in Osun today, we have played our preliminaries in Kogi State, and it was the finalists that we brought to Osun”, Lawal said.

Responding, Governor Oyetola who reeled out the administration’s achievements in youths and sports sector, in the last one year, said, in 2019 alone, Osun athletes ruled the sporting world, carting home loads of medals.

According to him, two Osun athletes qualified for Olympics Japan 2020 in Canoeing and Powerlifting, while Ayomide Bello emerged the first female Canoeist from Nigeria to qualify for the Olympics as she also won 1 Gold and 3 Bronze medals at the International Canoe Sprint Competition held in Bhopal in India.

He said Olaitan Ibrahim won Silver medal in 67kg in Powerlifting Championship in Kazakhstan 2019 just as two Osun athletes earned medals in Volleyball and Canoeing at the just-concluded All African Games in Morocco.

He said: “For us in Osun State, sport is not only a medal-winning and recreational activity, it is principally an instrument for imparting leadership skills in the youths to enable them to perform their roles as leaders of tomorrow”.

Governor Oyetola admonished the youths to shun acts and behaviour that can mar their future.

“The society is worried about the involvement of youths in criminal activities and other social vices. It is my firm belief that with their involvement in sports and other useful activities, we shall succeed in engaging them in meaningful activities that would be of immense benefit to the individual and indeed all our people.

“I am particularly impressed by the foresight of the African Sports Federation (AYSOF) in initiating such a programme that would uplift sports from the grassroots level and bring together youths from all over the country to interact in a friendly atmosphere.

“It is my dream for you that, in the next five years, some of you will be playing far away in Europe and will be among those who will lift UEFA Champions League trophy like Sani Kaita, Ahmed Garba, Mikel Obi and Victor Moses who are fellow compatriots”, the governor said.

Governor Oyetola commended President Muhammadu Buhari for building the nation’s economy and for implementing policies designed to empower youths in all spheres of life.

He said: “Permit me to pay tribute to the present administration of President Muhammadu Buhari, GCFR, for its laudable policies which favour advancement in all sphere of human endeavour.

“Mr. President’s unrelenting commitment to viable economic and social order in Nigeria has consistently inspired confidence in the people.

“At this time of our search for a better society, we cannot but appreciate the efforts of this administration in encouraging and promoting viable pastimes like sports, which cement the fabric of our corporate existence”.

Usyk too fast for Joshua – Tyson.