OUR SYMBOL HAS LAID LASTING LEGACIES IN STATE OF OSUN By: Dr. Desmond Ojumu

OUR SYMBOL HAS LAID LASTING LEGACIES IN STATE OF OSUN 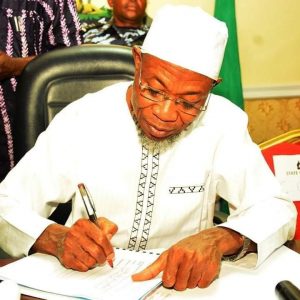 It is no longer news that Ogbeni Rauf Adesoji Aregbesola, our symbol in State of Osun, an architect of transformation, the game changer, the leader of leaders in the state, our No 1 Omoluabi in the State, our hero in Osun politics and Nigeria at large, has performed creditably well and beyond expectations.

Ogbeni’s administration is winding down but we cannot forget the array of good works done by our amiable Governor especially in the areas of infrastructure, education, security, economic recovery, agriculture, health care, beautification etc.

Ogbeni Aregbesola can be regarded and called so many names by different people -The Symbol, The Legacy, De Rauf, The Sage, -The Omoluabi, The Oranmiyan himself……

Ogbeni Aregbesola is not just a Governor in the State of Osun but a blessing to the State that opened roads for modern Osun of our dream. Ogbeni turned the state capital to a modern city that has made it become a cynosure of attraction to investors and tourists.

Ogbeni is not just a politician but a dogged fighter. He is a true representative of Oranmiyan who liberated State of Osun from the servitude of PDP. Our SYMBOL of lasting LEGACIES came, saw and he conquered.[post-carousel id=”1174″]