“Osun yet to have cabinet list, do away with fake lists – Prince Famodun*

*Osun yet to have cabinet list, do away with fake lists – Famodun* 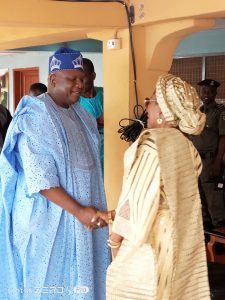 Sequel to public anxiety over two lists of the proposed members of the incoming cabinet of Governor Gboyega Oyetola as published online about a fortnight ago, the state Chairman of the party, Prince Gboyega Famodun, has told members of the All Progressives Congress (APC) in particular and the public at large to disregard same, tagging it as mere fabrications without credible foundation.

Famodun in a statement issued by his Media Consultant, Kola Olabisi, in Osogbo today said, there was no element of truth in the two phony cabinet lists reeled out to cause confusion and acrimony in both the party and the government.

The party chairman stated that there is a modality for putting  together such list which would soon be embarked upon by the necessary stakeholders in that regard in the state.

He said, he wondered why some people would just sit down in the comfort of their rooms and begin to generate a phony list of political functionaries.

Famodun disclosed that the authentic list of those to work with Governor Oyetola could not be a hidden thing as it would be made public for all to see when it is ready.

The party chairman said that he was yet to fathom what the mission of those behind the fabrication of the fake cabinet lists could be if not to initiate and promote confusion within the state.

He disclosed that the truth of the matter was that the two controversial lists did not emanate from neither the party nor the government.

In his words words: “There is only one constituionally recognised government in Osun today which is being headed by the recently Supreme Court affirmed Governor Gboyega Oyetola under the auspices of the APC.

“Such fraudulent cabinet lists that did not originate from both the government and the party are nothing but a product of fabrication put together for the reasons solely known to the author(s) of same.

“It was the figment of the imagination of those behind it which should be discarded for lacking in truth and substance”, Famodun disclosed.
He assured the people that when the authentic list emerges, it would be a combination of politicians and technorats who would effectively help in driving the vision of Governor Oyetola in the overall interest of the people of the state.