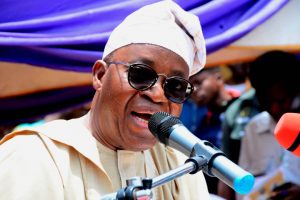 Osun State Government has no plan to return to payment of modulated salaries, Governor Gboyega Oyetola said on Thursday.

He also explained that the state has no plan to lay off workers but will rather prioritise their welfare.

The governor spoke during the commissioning of the secretariat complex of the Ila Central Local Council Development Area (LCDA) in Ila Orangun.

He described the insinuation that the government was planning to return to payment of modulated salary, which ended in June 2018 and which he has sustained since assumed office in November 2018, as “baseless and unfounded,” being pedalled by “the opposition and people with ulterior motive.” The governor urged workers to disregard the rumour. The state paid modulated salary to its senior employees during its economic hardship but this was terminated in June 2018.

Governor Oyetola said his administration had been working assiduously to develop workable and ‎realistic means of increasing the revenue of the state to match its expenditure.

He ‎said his government would ensure proper diversification of the economy in such a way that the state will be financially strong enough to cater for its needs without depending on allocation from the federation account.

The governor said: “The era of modulated and half salary is gone in Osun and never shall we return to it”

“This is the handiwork of the opposition and enemies of progress. We have started the payment of full salary since June 2018 and since then; our workers across board have been receiving full payment.

“What we are doing right now is to diversify our economy for greater productivity and efficiency as we are determined to harness our potentials to bring about the desired change.

“We are working assiduously to improve on our revenue base to match our expenditure and by extension make some savings for the state. We don’t pray for the return of the economic hardship which our state and the country went through.”