The Chairman/CEO, National Hajj Commission of Nigeria (NAHCON), Alhaji Zikrullah Kunle Hassan, on Friday lauded the Government of the State of Osun for being the leading light and a pacesetter in the Hajj process in the country. 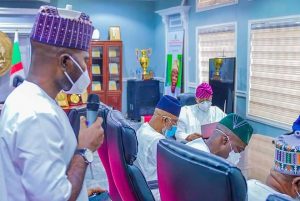 Hassan said Osun has been top-notch as far as Hajj is concerned in the last ten years as manifested in the huge success the State had recorded over the years.

NAHCON Chairman gave the commendation during a courtesy visit to the Governor, at the Governor’s office, Abere.

He said the Commission has been monitoring the sterling performance of the State in the last ten years, a motive he described as most impressive and commendable.

Hassan who led some members of staff of the Commission to Osun, described the visit as a familiarisation and advocacy visit to sensitise the Muslim community on the need to partake in the ongoing Hajj Savings Scheme. 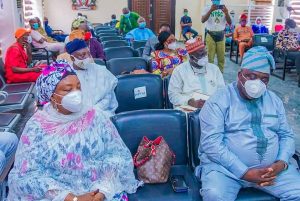 According to him, the Hajj Savings Scheme was designed to support the intending Hajj pilgrims to actualise their dreams to seamlessly perform Hajj without financial hindrance.

“What we are saying is that governments do not have enough resources to be sponsoring people on pilgrimages. That is why we came up with the initiative called ‘Hajj Saving Scheme’ aimed at supporting intending pilgrims to actualise their dreams.

“The concept is that every Muslim is a potential pilgrim. No matter the level of richness or poverty, all you need to do is to save. This has been successfully done in countries like Malaysia where people save for like ten to fifteen years.

“It is a thing we have to encourage. We need to encourage our people to embrace the idea. This is well-thought out and we believe that it will help the poor Muslims all over the country and correct the notion that one needs to sell his business before one goes to Hajj. One does not need to be indebted before one can go to Hajj. 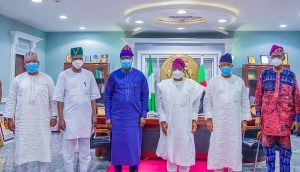 “We are also working to digitalise the Hajj process in such a way that will enable massive participation and reach large people across the country. This is the only way to go because Hajj is a mono-product in Saudi Arabia.

“Osun in the last ten years has been top-notch as far as Hajj is concerned. The current management has been taking the battle and they are doing very fantastically well,” he added.

In his remarks, the Governor of the State of Osun, Adegboyega Oyetola applauded Hassan for bringing innovation and modern technology to advance the operational scope of the Commission.

Oyetola who described the Hajj Savings Scheme as a welcome development and people-oriented initiative, said “with this scheme people can go to Hajj without unnecessary financial burden.

“I commend you for making Hajj more affordable for the people, particularly those at the grassroots. Setting up this Hajj Savings Scheme, is a commendable move as it will help the people to save enough to go to Hajj.

“I also commend the Commission for coming up with the idea of digitalising Hajj process in such a way that will be more accessible by the people from the comfort of their homes. To me, this innovation you are bringing on board will help to ensure proper management of all Muslim Ummah going on Hajj,” Oyetola added.

President Muhammodu Buhari appoints board and management of...

Olori Naomi hasn’t returned to the palace of...