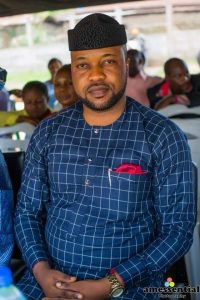 Tunde Lekan Olatunji lawmaker representing Ife-north constituency in the Osun state house of assembly, says the All Progressives Congress (APC) has the final decision on whether he will contest for the speakership of the assembly or not.

The banker turned politician said as a loyal party member, he is willing to take whatever decision of the party as regards the speakership contest.

“I’m a man of purpose. I know why I chose to be part of governance. For me, I am driven by vision and not ambition. What matters at this time for me is how do we move the state forward. The best thing is to see how the state can be taken to the next level,” he said in a statement.

“I am grateful to my people for re-electing me and that for me is a milestone. It means I have another opportunity to serve and my vision is to serve. I’m privileged by God and my party to vie for this seat again and emerge victorious, any other assignment or position that may come thereafter is not for me to decide. “The position will be decided by members of the house. It will not be decided on the pages of newspapers.

“However, the party has the final say and it is yet to make its decision public. I’m a loyal party member to the core. I also believe strongly in the tenets of democracy. There are many capacities one can serve in government. Whatever capacity they see I am fit to serve, be it the speakership or even member, I will take it and serve with utmost integrity, loyalty, commitment and ingenuity. We should not forget that leadership is not just in title or position but the capacity of the person occupying the position.”

He noted that what has occupied his mind was developing his capacity to enable him make more impacts in the state beyond what he did during his first term in the house, adding that he was open to whatever role the party, government and people see as appropriate for him to do more than he was doing