The Governor, State of Osun *Gboyega Oyetola* has in the last eight months of his administration continued to keep faith to his electioneering promises made to the teeming populace of the state through his various critical intervention in all sectors like security, health, mining and agriculture.

*IleriOluwa* as the Governor is fondly called, has approved the release of substantial funds to mobilize contractors back to project sites, RATCON & Sammnya Construction Companies have resumed back to the long stretch of the *Gbongan – Ode Omu – Akoda & Osogbo – Ikirun – Ila Odo Kwara boundary* expressway respectively, these are legacy projects birthed and conceptualized by the immediate past administration of Ogbeni Rauf Aregbesola. 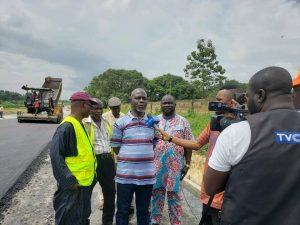 In an assessment tour made by the State Ministry of Works and Transport officials led by her Supervisor, *Engr. Remi Omowaiye*, he acknowledged that due to paucity of funds which has incapacitated the completion of project in record time as envisioned but government has engaged the contractors in a fruitful discussion with the assurance of maintaining the standard of quality Osun roads and sticking to the road design.

“In spite of our obvious challenges and confrontations, the *APC Oyetola led administration* has to the admiration of our people embarked on township road rehabilitation in *Ede, Ejigbo, Ikirun, Iwo, Ilesa, Ife, Osogbo and Iragbiji* covering eleven local government areas with high hopes that the second phase will soon start which will spread to others cities and towns”, Omowaiye emphasized.

He however expressed appreciation to *Mr. Governor, Gboyega Oyetola* for his unwavering commitment and foresight in ensuring speedy completion of all uncompleted road projects within the state, in order to fast track the economic indices that will aid industrialization of the state for agriculture, manufacturing and commercial activities, as well as mineral exploration.

In his response to Journalists, the *Director of Highways, Engr. Basiru Akande* expressed satisfaction with the pace, quality and level of standard work done by the contractor as he promised that his ministry will ensure proper supervision as work progresses on both roads.