Popular Posts
The Story Of Attah Ameh Oboni – the...
The state of Osun Anthem,Yoruba and English.
King (Dr) Saheed Osupa 58 Albums between 1992...
Opon Imon (Tablet of Knowledge)Read this carefully from...
CP reads riot act to miscreants in Osun...
Gists 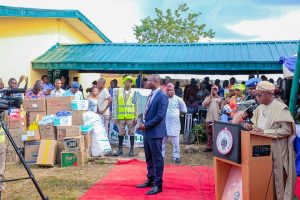 .As gov inaugurates another 10 PHCs

The Osun State residents on Tuesday, applauded the administration of Governor Adegboyega Oyetola for being committed to their welfare.

This is even as they have promised to vote overwhelmingly for the governor and the party in future elections, as a show of appreciation for the good work the governor is doing. 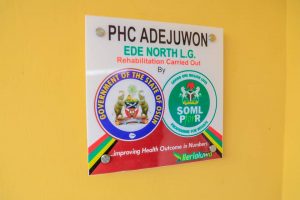 Speaking on behalf of the residents of Ijesaland at the inauguration of the newly renovated Primary Healthcare Centre, at Imo, Ilesa, prominent persons in the area, including former Health minister, Prof. Isaac Adewole, Chief Kunle Odeyemi and Engr. Remi Omowaiye, who is the state’s Supervisor for Works, said the administration has so far shown that what the state witnessed in the last administration in terms of development, will be small compared to what it will witness in the present administration. 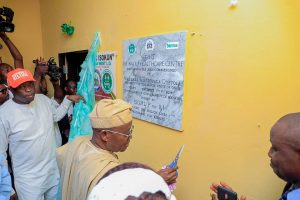 The state government had on Monday commenced the inauguration of 25 Primary Healthcare Centres (PHCs), which are part of the already completed 100 PHCs across the state.

Prof. Adeowole who appealed to Ijesa people to ensure that they speak loudly with their votes in 2022 in support of the governor and the All Progressives Congress (APC), further said “I said it yesterday that Osun has become the leading light in the health sector as reflected in the huge commitment that the state had made to reposition the sector for the optimum use and benefit of the citizenry.

“I said it yesterday and I am repeating it that no government in Nigeria has embarked on the construction and renovation of 332 PHCs at a time as being done by the present administration in the state.

“This is a rare feat. This is also a welcome development targeted to support the health needs of the people across the nooks and crannies of the state. “ 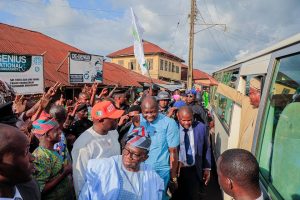 On his part, Chief Odeyemi applauded the administration for the priority given to the critical sectors of the economy since assumption office.

He described health sector as the most critical, and hailed the government for ameliorating the suffering of the people in trying to access quality and affordable health facilities in the state.

“I must commend the state government for reviving the lost glory in the health sector. This is a welcome development aimed at ensuring that citizens have access to quality and affordable healthcare delivery.

“There is no doubt that this initiative will further help to enhance quality service delivery and boost the sector for the benefit of the people of the state. 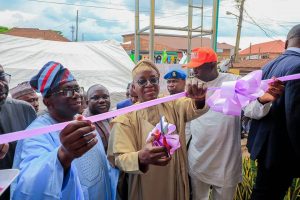 “I am appealing to our people to take greater advantage of this laudable opportunity provided by the state government towards ensuring general healthy living.

“I want to also assure the governor that in 2022, the votes we gave to our representatives in the state Assembly, will be small compared to what we will give you, ” Odeyemi noted.

Also, the Owa Obokun of Ijesaland, Oba Gabriel Adekunle Aromolaran, thanked the government for addressing the rot in the health sector.

The monarch, who described the initiative as remarkable, assured the state of his support towards the delivery of the dividends of democracy.

The Supervisor for Works and member of the Osun Health Revitalisation Committee, Engr. Remi Omowaye, who described the project as tip of the iceberg in what the administration of Governor Oyetola has in stock for the people of the state, also said Ijesa people will reciprocate the good gestures of the state with massive vote for the ruling party in the next governorship election.

Earlier, the Executive Secretary, State Primary Health Care Development Board, Dr. Oluwole Fabiyi, described the rehabilitation and revitalisation of the PHCs across the state as unparalleled since the creation of the state.

He assured government of the commitment of the entire workforce of the state primary healthcare board to quality service delivery.

Among those in attendance at the Ilesa inauguration include: Chief of Staff to the governor, Dr. Charles Akinola; former member, House of Reps, Hon. Ajibola Famurewa, Mr. Gboyega Famodun and Alhaji Rasak Salinsile, state APC party Chairman and Secretary respectively and members of the state House of Assembly among others.