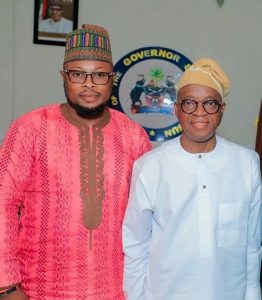 The Member of Osun State House of Assembly representing Ede South State Constituency on the platform of PDP Hon Olaniran Akanfe Atidade has commended the State Governor Alh. Gboyega Oyetola on his decision to light up Osogbo the State capital with Solar Street Lights, enjoined the governor to extend this giant feat to the ancient city of Ede too. Hon. Atidade made this known while answering questions from journalists who visited his in his office, he said aside that the project will greatly assist the road users, it will also reduces the level of insecurity on our highways and give our cities very beautiful look.

His statement read “I want to sincerely commend Mr. Governor for lightening up Osogbo the State Capital with modern Solar Street lights, this is a giant feat that should last for decades if properly maintained. One of the major challenges we are having as a government and individual is that we lack maintenance culture. If the social amenities put in place for the use of citizens by the governments at all levels are properly maintained, they will definitely last longer.”

“Imagine the Power Street Lights installed that spanned from Akoda to Oke Gada in Ede and in many other cities by the administration of our late icon Asiwaju Isiaka Adetunji Adeleke as the first executive governor, that’s is a very good legacy that should still in use till date, but lack of structured maintenance culture kills many projects by the past administrations and this make it look as if the past administrations did nothing during their reigns.”

“I want to enjoin Mr. Governor to please extend this good dividend of democracy to the city of Ede too by lightening up the station road from Akoda to Oke Gada with solar street lights, the frames installed since late Asiwaju Isiaka Adeleke’s administration are still there intact and can also be reuse.”

The Progressives e-Group rejoices and celebrates Oluomo of Ejigbo @54.